Yet Another Name Change, Plus a Cool Ebay Pickup

Well, I've decided to change the name of my blog yet again. I started out with My Cardboard Obsession, but it sounded too much like a Calvin Klein cologne ad. Then I went with "Who Own Da Chiefs" in reference to my favorite sports movie, Slap Shot, but someone had already registered the web address, so I had to add my name to it, which got to be too wordy. I had considered going with "Hey Hanrahan!" but it would require an awkward explanation which would offend most people I told it to, and great lines like "The ******* machine took my quarter" and "That **** is no good," were just flat out profane.

I think I'm going to stick with this one, though. For one, I think it's at least catchy and memorable, plus it (kind of) rhymes. And although I may be thinking WAY too ambitiously, the web domain itself is available and would make a great name for a podcast. Although I have just gotten my feet wet in the internet card trading community, I would definitely like to do something more with this than just posting random Wal-Mart blaster box breaks.

I did, however, pick up a pretty cool card for my Kerry Wood personal collection this week. It is a Gallery Originals jersey card from the 2005 Topps Gallery set. The condition isn't quite mint, as a little bit of the blue has rubbed off on the bottom and there appears to be a little bit of a crease where the hole was cut, but the card is fantastic looking. 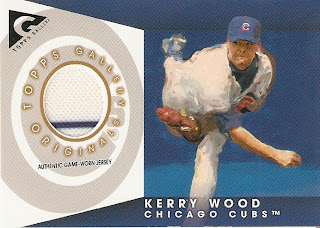 I always love the painted sets, whether it's 2010 Allen & Ginter or 1987 Donruss Diamond Kings, plus I love the way the swatch is framed, even though the stripe is horizontal. The kicker with this card is that I purchased it for the ultra low price of $1.25 with free shipping. When I received my package a few days later, the shipping label showed a charge of $1.22. Essentially, the seller made a mere three cents. Now I know that Wood is nowhere near the player he was in 1998, when he struck out 20 Astros in a game, but he's worth much more than 3 cents.
Posted by Matt Pederson at 2:42 PM