Well, like with a few other bloggers out there. 2012 Topps Series 1 has hit my local retailer. The Target I went to with the wife had blaster boxes and hangar boxes, but no single packs oddly enough. doing the math, I figured that for the same price as a blaster box, two hangar boxes would give me twice as many base cards, but I'd have to sacrifice about half as much inserts and a manufactured patch card. Done and done.

Here's what I found: 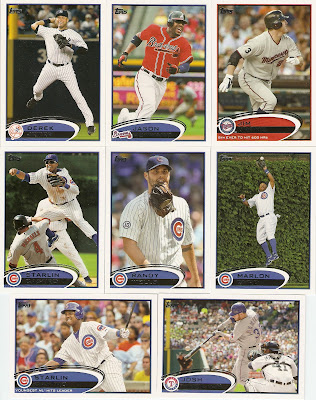 I must say, these cards look much better in person than the previews would lead you to believe. They also mix some peculiar shots (Wells) with some awesome action shots (Hamilton). 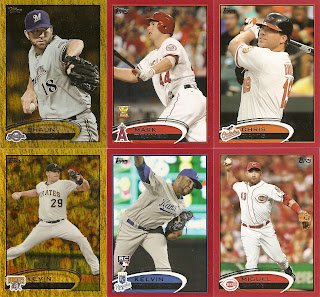 On the parallel front, I like the gold sparkly cards. They work really well with the design, but the Target red-bordered card look forced. Another advantage with the hangar boxes is that these come only two cards per box, as opposed to two whole packs of the stuff. 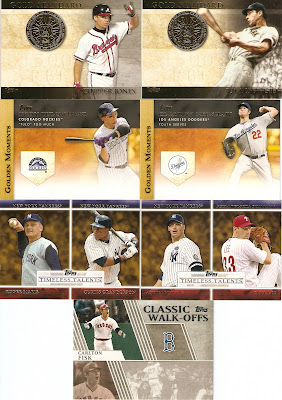 The Gold Standard inserts look great, although the Golden Moments and Timeless Talents cards seem to be this year's version of Topps 60 and Diamond Duos (or Peak Performances and Legendary Lineage). And if your going to pull a Classic Walk-Offs card, and it isn't going to be Kirk Gibson, you'd want to pull a Fisk, right? 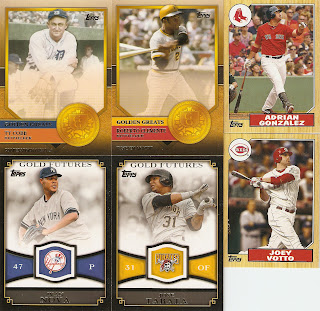 Another insert I like is Golden Greats. Anytime you can pull a great looking card of a hall-of-famer, it's a good thing. Gold Futures, on the other hand, left me underwhelmed. I'm not a prospector, so all I see is cards of guys I've never really heard of. I kind of like the '87 throwback cards, but why are they minis? I guess they figured people liked the '75s so much out of lineage, that they'd try to recreate that magic.

I also got two Golden Giveaway cards. Unlike some bloggers out there, I LOVE the on-line promotions Topps has been putting on. The Million Card Giveaway was fun and the Diamond Giveaway was great (whenever the Topps IT department wasn't working on it, that is), so I'm really looking forward to this year's offering.
Posted by Matt Pederson at 3:12 AM 3 comments:

Trade With Juuust a Bit Outside

Soon after completing a trade with Kyle from Juuust A Bit Outside, he contacted me to let me know that he had some more set fillers I needed from my want list. As I have begun that final drive to complete my 2011 sets before 2012 comes out, I jumped at the chance to get that much closer. 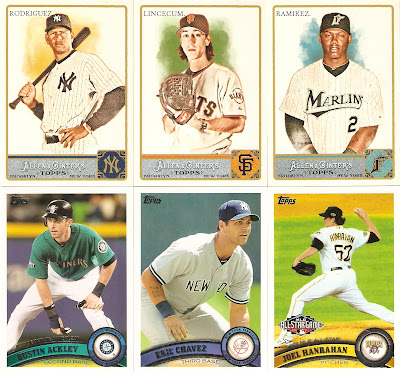 My big two I wanted to complete in 2011 were Allen & Ginter and Topps. Thanks to Kyle's help I am now much closer to completing that goal. 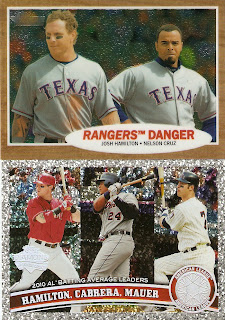 In addition to the set needs, there were a few cards included for my player collections, including these two Josh Hamilton parallels.

Thanks, Kyle, for another great trade!
Posted by Matt Pederson at 7:40 AM 1 comment:

The Risk of Buying Autos in the Offseason

A few weeks ago, I was fortunate enough to win an ebay lot of nine autographed Cubs cards. Less than a month later, I'm left with one-third of them still on the team. Here's the rundown: 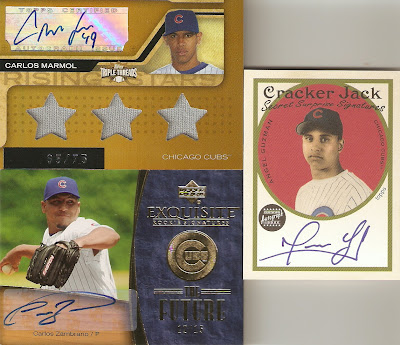 Carlos Marmol: Currently with the team
Carlos Zambrano: Traded to the Marlins
Angel Guzman: Signed with the Dodgers 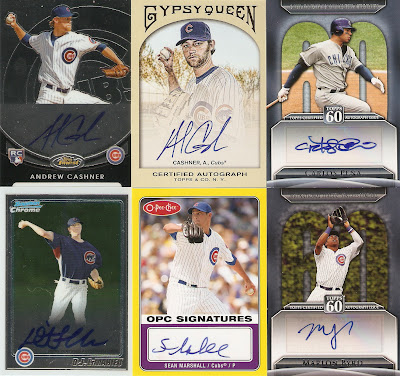 EDIT: And with Pena signing with the Rays, that brings me to 2/9.
Posted by Matt Pederson at 5:05 PM 7 comments:

Upon coming home from my trip to Houston, I was greeted by a manilla envelope from Sam at the Daily Dimwit. Sam hosted a group break of 2007 Artifacts, 2009 A Piece of History, and 2009 SP Authentic.

I chose my Cubbies, and luckily, I received the Marlins as my randomed 2nd team. The Cubs were sparse, but the Marlins were plentiful, especially in the hits department. I received two Josh Johnson jersey cards, BOTH serial numbered to 130 and a Dan Uggla jersey card. Marlin relics are always some of the more colorful cards you will find, so you rarely go wrong with them. 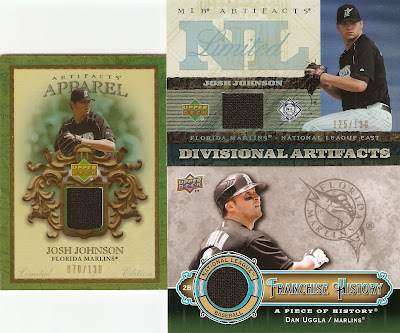 I got a few decent Marlin base cards, but the best one is definitely the Hanley Ramirez Box Score Memories insert, which has the low serial number of 64/99. 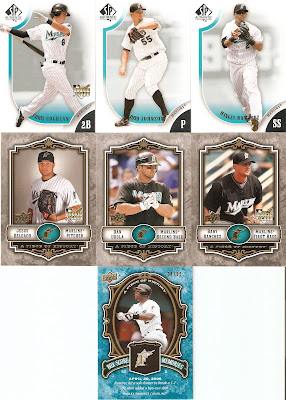 And here are the Cubs. Nothing special, but I did like the card dedicated to their last World Series win. 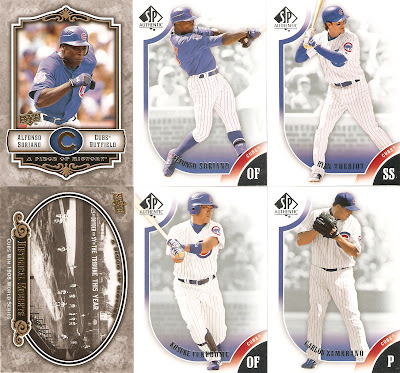 So there it is. If you haven't already, go check out Sam's blog.
Posted by Matt Pederson at 8:45 PM No comments:

A Couple of Recent Trades, a Break, and a Draft

In the interest of catching up on trades and breaks that were completed weeks ago, this will be short. Not because I'm lazy, but because I've forgotten about most of the details.

The first was from Greg at Plaschke, Thy Sweater is Argyle. I've completed a few trades with Greg since I began blogging, and am always happy with what I get in return. This was no exception, as he knocked a few cards off my 2011 Allen & Ginter want list, which is drawing close to completion. He also sent over an autographed ard of new Cub David DeJesus, and a cool Jeff Samardzija A&G relic card. 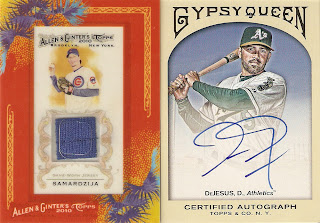 I also completed a trade with Kyle at Juuuust a Bit Outside. Kyle Sent me a LARGE number of Allen & Ginter cards for my 2011 set, as well as some Topps base and Allen & Ginter. there were even quite a few of those ellusive SPs thrown in there. I'm ashamed to say that I still haven't gotten his cards out to him quite yet, but I'm trying to get things back in to gear. Sorry for the delay, Kyle.

I also was fortunate to win a contest for my very first printing plate, which is also my first one-of-one. Cheap Card Collecting had a contest for a mysterious plate that was pulled out of 2006 Upper Deck Ultimate. All you had to do was guess the team that the player played for and the first correct one wins. I guessed the Cubs, and won a blue (or is it cyan?) plate of Derrek Lee. That name may not mean much now, but this was a pretty big pull back in '06. 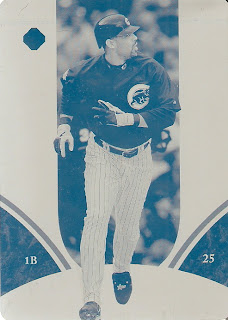 Lastly, I think, was a card draft hosted by Cameron at Cardboard Heaven. I made out pretty well, with an autographed rookie card of a 2011 All Star, a serial-numbered Ernie Banks, and rookie cards of guys named Hamilton, Teixeira, Beckett, and Molina. There were also a few minor league cards that I don't mind having, I just don't want to pay good money to try and get them out of packs. Anyway, here are scands of the hits, the rookies, and the Cubs. 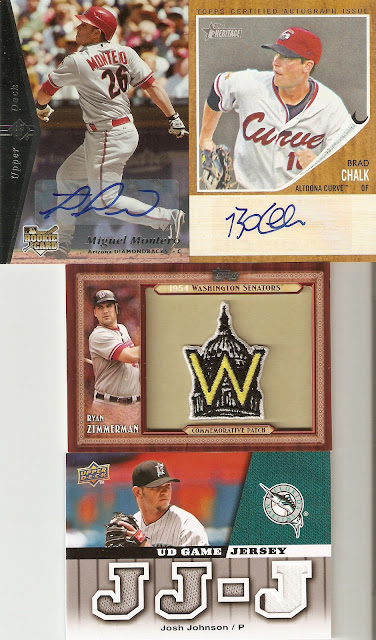 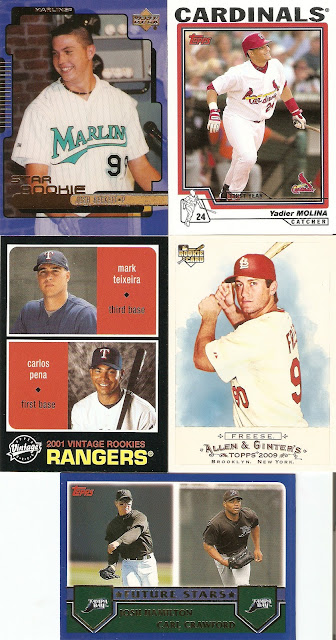 Anyway, that's what I got int he mail before I took a break to travel for my wife's surgery. On one hand, due to what was going on, I wasn't able to dedicate the time to writing, but on the other hand, with everything that I was dealing with, it was nice to get some manilla envelopes in my mailbox.
Posted by Matt Pederson at 10:12 PM 2 comments:

What's Been Going On In My World

Well, as usual, I open up my Blogger main page to see what new posts, tradesa nd group breaks there are, being the good little lurker that I am, when my eyes wander up to the top of the page, where I can see, "last published on Dec. 26, 2011." Yikes. But there has been a lot going on.

As I have already written about here, 2011 was quite the eventful year for the Pederson household. As it turns out, 2012 has already started out with plenty of activity. To start out the year, I found myself with a new job. Basically, I'm a manufacturing technitian at a sugar factory in ND, which is never the job you expect to find yorself in when you're pursuing a college degree. But the pay is good, I get plenty of hours, and most importantly, DAY ONE HEALTH INSURANCE!!!!!!!!!!!!!

That came into play, because TEN days after I began work, my wife went in for her second surgery to remove some cancer-infected lymph nodes from her neck. One of the deals she made with me when we moved up to North Dakota was that she would support the move, so long as she could fly back to Houston to have her surgery done at M.D. Anderson Cancer Center. I know there are a lot of good cancer treatment facilities all across the country. In fact, we have the Roger Maris Cancer Center right here in Fargo. But when people literally fly across the world to get their treatment done, that's when you know you have a good place.

We had the surgery done last Thursday. Since she had a thyroidectomy last December to remove a cancer-infected thyroid gland, and they would have to go through a recently-operated-on area, this was a very delicate operation, but by all accounts, we pretty much had the best guy in the world at this kind of operation, doing this operation.

After four hours, the doctors came out to the waiting room and spoke with me. He said everything went as well as it could have. When I asked him how many lymph nodes were removed, all he could say was that they removed "a lot." As good news, a node of concern that would require a third surgery, due to its location, came up benign when they did an ultrasound. After a couple more hours, she woke up feeling groggy, sounding hoarse, and on her way to recovery.

She and the baby are still in Houston, spending time with her family and taking care of a couple follow-up appointments, while I came back with our 3-year-old, to get back to work.

Talk to you all soon. 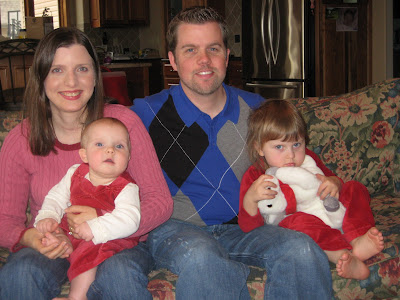