Here's a card that I came across, simply because it was at a good price 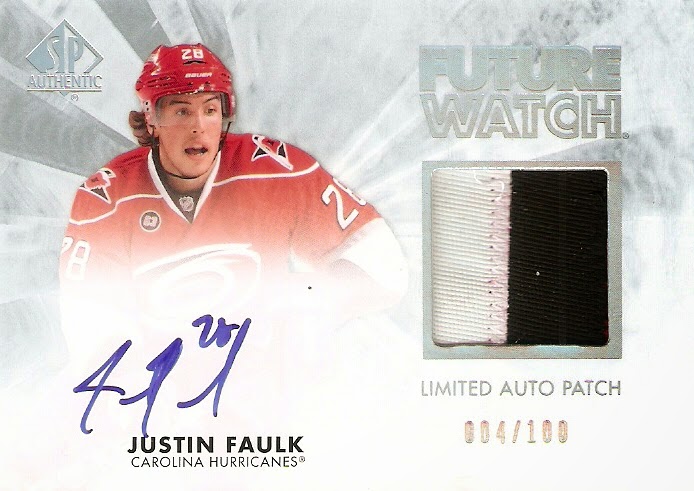 From 2011-12 Upper Deck SP Authentic, this is a Future Watch autographed patch card numbered 4/100 of Justin Faulk from the Carolina Hurricanes. Faulk was a second-round pick of the Hurricanes in 2010, and played one season at the University of Minnesota-Duluth, before jumping to the NHL. Since going pro, he has represented the USA at the 2012 IIHF World Championship and 2014 Winter Olympics, and now serves as one of the Hurricanes' alternate captains.
Posted by Matt Pederson at 11:34 PM No comments:

Oh, Panini, You Got Me On This One! (Wrong Swatch Replacement)

So, a few months back, I purchased a box of 2013-14 Dominion, and my one guaranteed autographed patch rookie card was of Ryan Spooner from the Boston Bruins. The card is numbered 78/299, and features and on-card autograph of the Bruins rookie. The only problem, was that it didn't feature, was a patch. All that was there was a plain black jersey swatch. 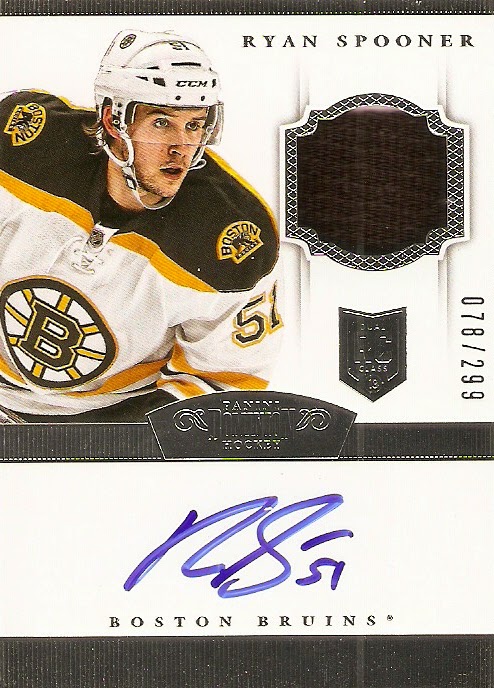 Knowing that Panini is good about standing behind their product, I sent it in to them, requesting a replacement, as at didn't feature what was promised. Part of it also, was to see if I could get a better looking swatch, with two, or maybe even three colors. 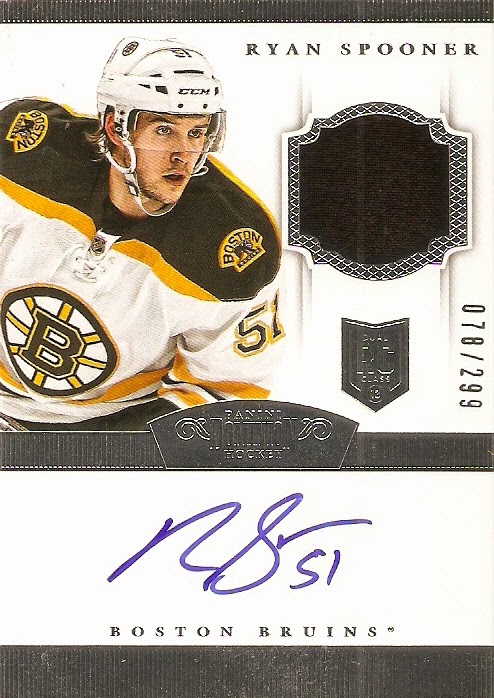 What I got back was a patch, but a solid black swatch, looking just the same as the original one I pulled. The odd thing is, though, that it is clearly a different card, with a different signature, but the same serial number. Did Panini send these out to the player unnumbered, and number them after they were returned? Did they send a fresh card to Spooner for him to sign to replace the damaged one?

Either way, even though the card looks exactly the same as my patch-less patch card, at least I now have a card that is as it was supposed to be.
Posted by Matt Pederson at 10:15 PM 3 comments:

After waiting a few months, I finally got my Jonas Brodin Playbook rookie booklet. I bought two redemptions for the Brodin, because the seller was selling two redemptions on the same listing, so I actually have a pair of these for now. They look the same, though, so I'll just show the one.

This particular Brodin booklet is numbered 70/199, and contains a shadowbox effect with the two images on the left side, right next to a piece of the player's jersey. On the right side, you get another jersey piece, right beneath the player's signature on a clear surface. Red jersey swatches are used for both pieces of fabric, which really makes these card look great. 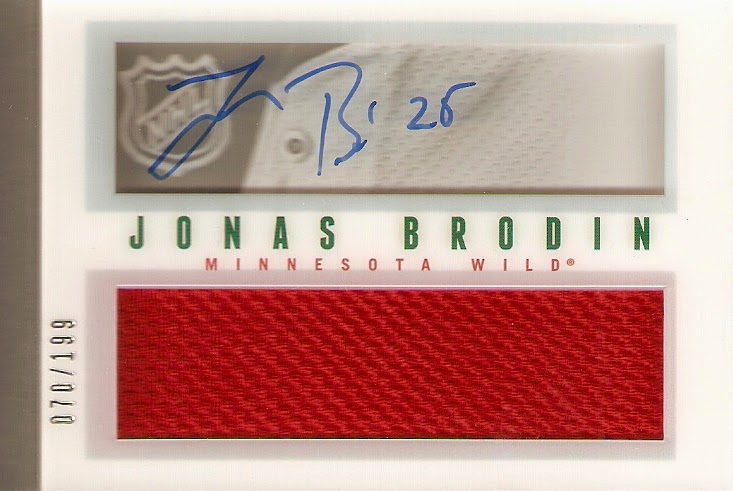 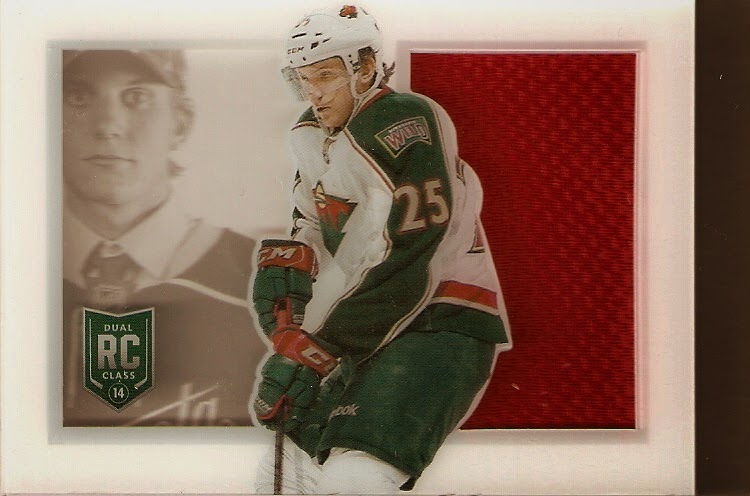 Here's the other one, numbered 67/199 that is available for trade, if anyone is interested.

Posted by Matt Pederson at 12:45 AM No comments:

It's a basic card, I know, but it's also the latest addition to my Sidney Crosby Collection. 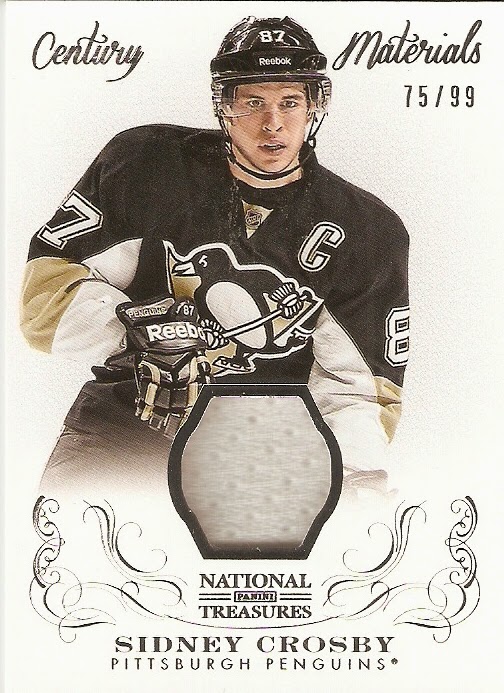 From 2013-14 National Treasures, this is a Century Materials jersey card, numbered 75/99. I'm not sure of what the title of the set has to do with anything, but the back of the card does spotlight Crosby becoming the youngest player to score 100 points in a season.
Posted by Matt Pederson at 12:53 PM No comments:

It took me a few years of collecting Sidney Crosby, but at long last, I have an autographed card of his from Upper Deck The Cup! 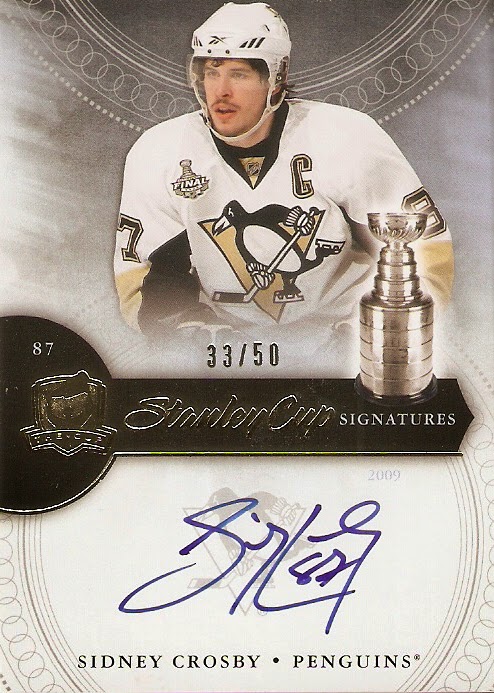 This one comes from the Stanley Cup Signatures set of the 2011-12 release. It features an on-card autograph on top of a team logo, right beneath a photo of Crosby, and is numbered 33/50. What I really like about this card is what I like about most of the higher-end releases, which is that they are simply at their best when they dispose of all of the bells and whistles, and just give you a clean, beautiful, high-quality piece of cardboard. It just doesn't get much better than this.

Well, it does, actually, when I put this card right next to the Mario Lemieux and Ron Francis/Paul Coffey cards from this same set. 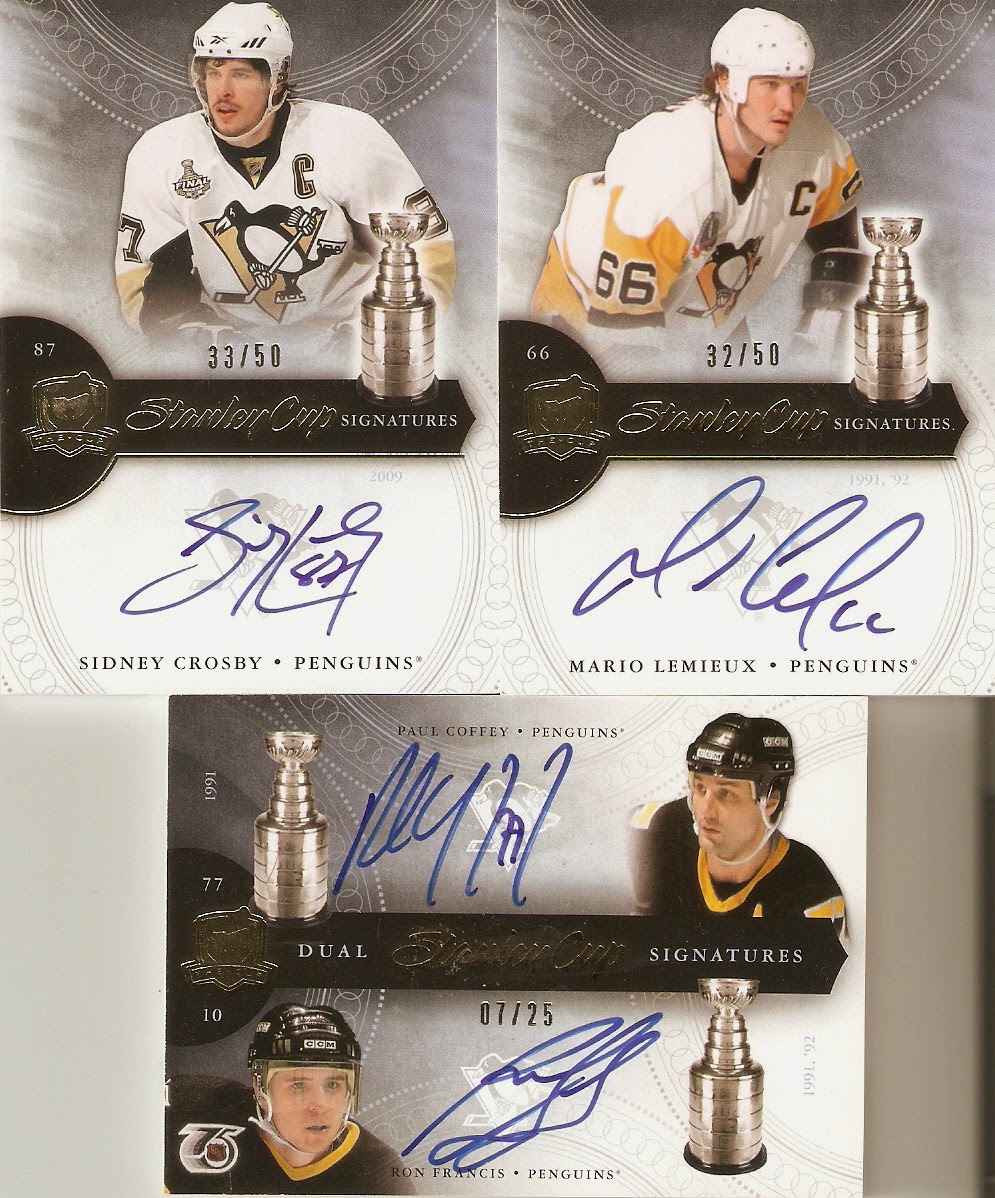 This trade took place a while ago, but to to personal issues (all good ones) getting in the way, I just haven't had the time to post these. Well, here I am, with a day off of work, and the wife out with the new baby (girl #3), so let's get to it!

This was a pretty easy trade, as Dave H from Wax Stain Rookie expressed interest in a few cards that I pulled from my box of 2013-14 Prime, and offered up a few cards for my various collections.

2011-12 Between the Pipes Matt Murray Future Stars Goaliegraph
While it may not be easy to tell, this one lands in my Pittsburgh Penguins Collection. Murray is a prospect in the system, having been drafted in the third round (83rd overall) in 2012. After playing the past four seasons with the Sault Ste. Marie Greyhounds of the OHL, Murray has landed a spot on the Penguins' AHL affiliate in Wilkes-Barre/Scranton. 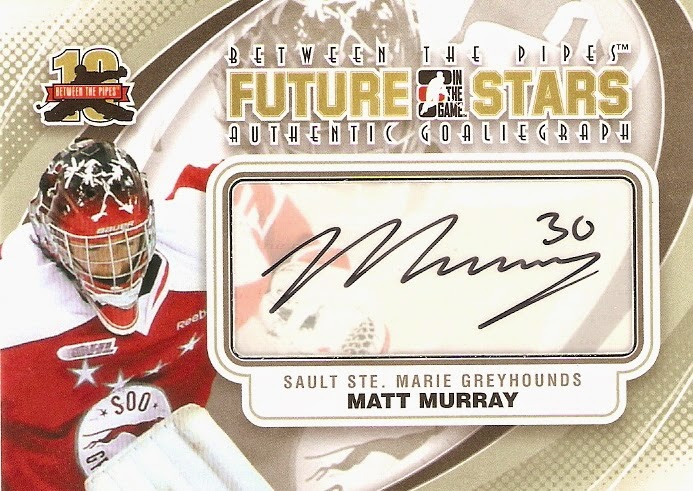 2009-10 Black Diamond Travis Zajac Gemography
The Zajac card is going right into my University of North Dakota Alumni Collection. Zajac plyed for the Fighting Sioux during the 2004-05 and 2005-06 season, and played on a team with future NHLers Jonathan Toews, T.J. Oshie, Drew Stafford, Brian Lee, Taylor Chorney, Chris Porter, and Matt Smaby. After trading two picks to the Dallas Stars in order to move up to the 20th overall spot in the 2004 draft, the New Jersey Devils made him their first selection that year. 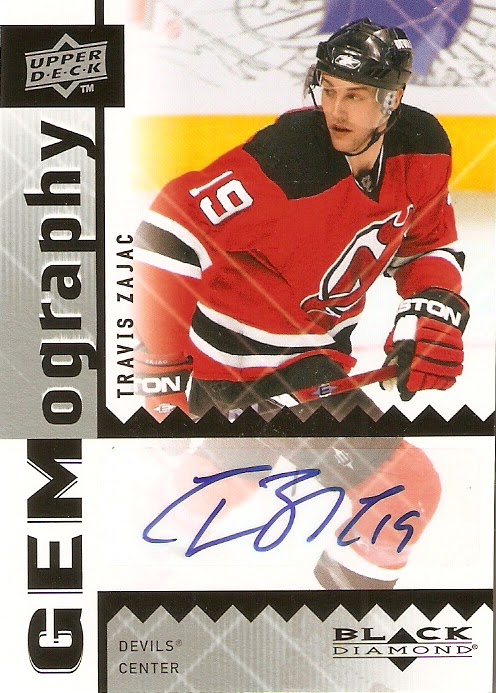 2005-06 Ice Ed Belfour Frozen Fabrics Jersey
Like the Zajac, this Belfour jersey card is heading to my UND Alumni Collection. He spent just one season with the Fighting Sioux, in 1986-87, but he made it count, finishing with a 29-4-0 record, on the way to an NCAA National Championship. He would sign with the Chicago Blackhawks after that season was over, and had a 17-year NHL career that saw him win one Stanley Cup, two Vezina Trophies, four Jennings Trophies and one Calder Memorial Trophy. He was elected to the NHL Hall of Fame in 2011. 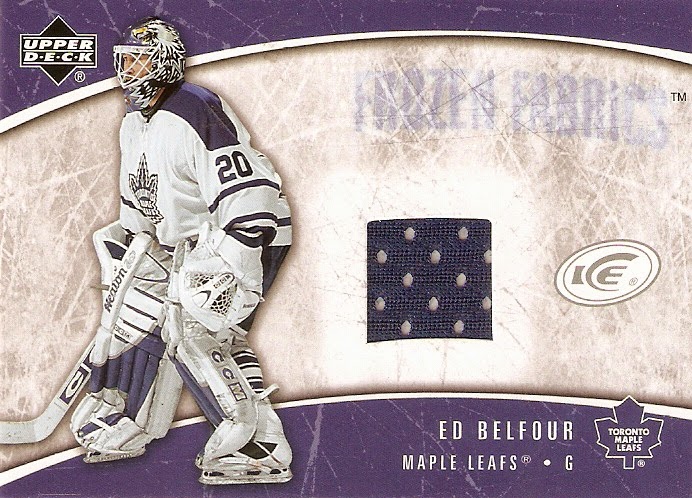 There were a few other throw-ins along with these, but these cards are really the ones that drew me in. Thanks for another great trade, Dave!
Posted by Matt Pederson at 8:12 PM No comments:

Marc-Andre Fleury Silver Parallel 2/25
I'm not really sure if this counts as a "hit," but it is an incredibly rare parallel of the Penguins' netminder. Like most parallels, this is basically just the base card, with a different colored foil, and a super-low serial number. 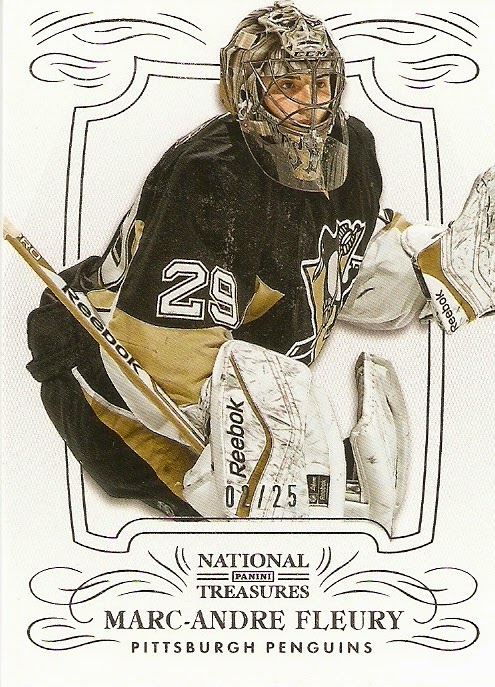 Mario Lemieux Century Materials Jersey 30/99
This may be nothing more than a run-of-the-mill jersey card, but I really like this one. Not only is it of the greatest Penguin in history, but you actually have the swatch matching the photographed jersey, which is especially cool, considering the rarity of him wearing the powder blue. I believe it was only worn during one of the alumni games before one of the Penguins' two Winter Classic games. 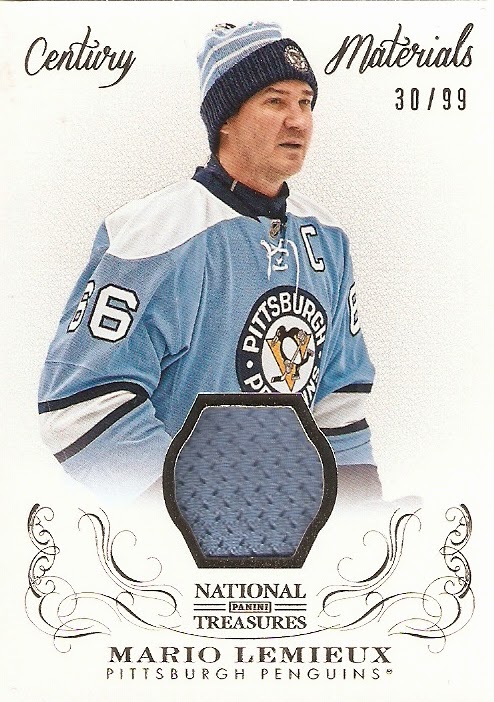 Eric Hartzell Rookie Treasures Autographed Patch 39/99
Apart from The Cup, which is slated to hit hobby shops later this month, National Treasures is providing the top rookie cards of the 2013-14 collecting season, with on-card signatures and some jumbo-sized patch pieces. This one is of Penguins' netminder Eric Hartzell, who is currently playing with their ECHL affiliate, Wheeling Nailers. He still has a few steps in front of him before reaching the NHL level, but with Fleury's future with the team always in question, he may soon get the opportunity. 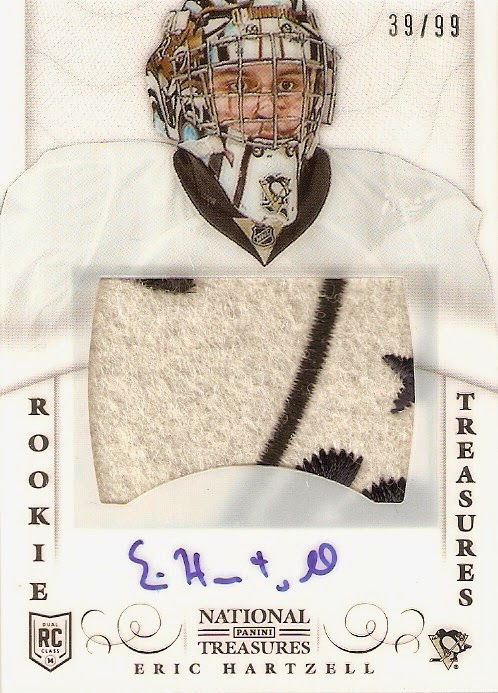 After some unsuccessful case breaks, I was glad to finally have some hardware to bring home with me. There weren't any major pulls here, but at this point, I'll take what I can get.
Posted by Matt Pederson at 11:01 AM No comments: 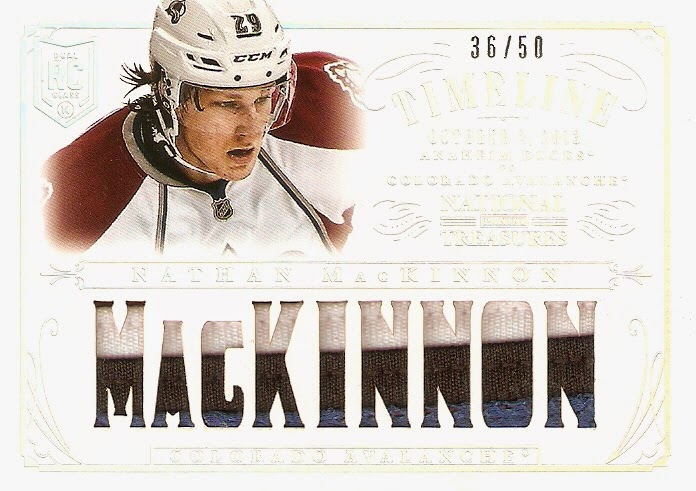 The card comes from the Timeline insert set of 2013-14 National Treasures and is serial-numbered 36/50. It contains a die-cut of the player's name overlaying a single piece of prime jersey. In this case, there are actually four colors, which is pretty amazing, with blue, black, white, and a sliver of red right at the top. The card itself doesn't scan well, so i placed it on the scanner at a slight angle, to try and get some kind of clarity on the foil. 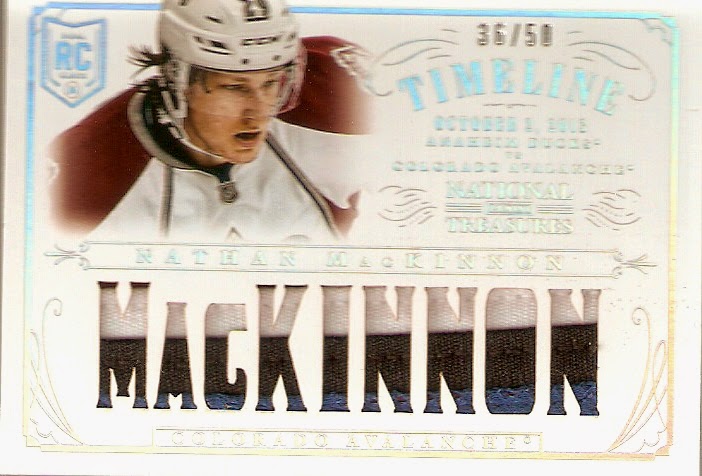 Not sure if that helped, but trust me when I say that this is one fantastic card.
Posted by Matt Pederson at 1:43 PM 4 comments:

Here is a really cool card I was able to pick up in a raffle on a Facebook group that I am a member of: 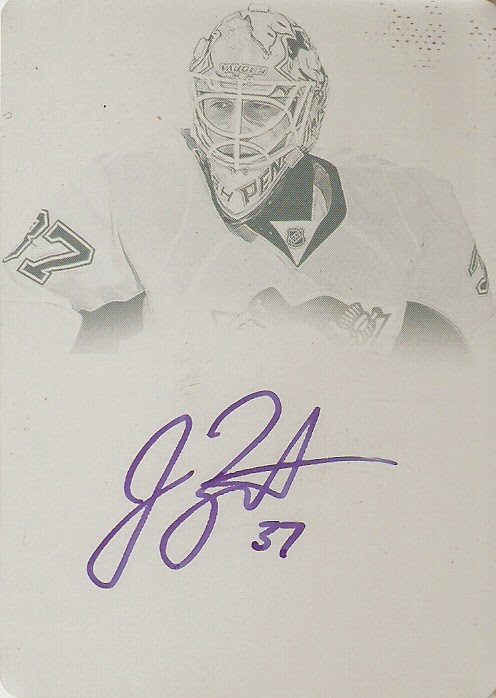 From 2013-14 National Treasures, this is a yellow printing plate of Penguins goaltender Jeff Zatkoff. This card is from the autographed rookie card portion of the set, and the cool thing is, like the regular version, features an on-card (or rather, on-plate) autograph. What I also like about the card, is that like other Panini high-end releases, they put the card backing on the back side of the plate, which makes it look like an actual card, and gives you all the information as well. And, of course, the all-important "One of One" serial numbering. 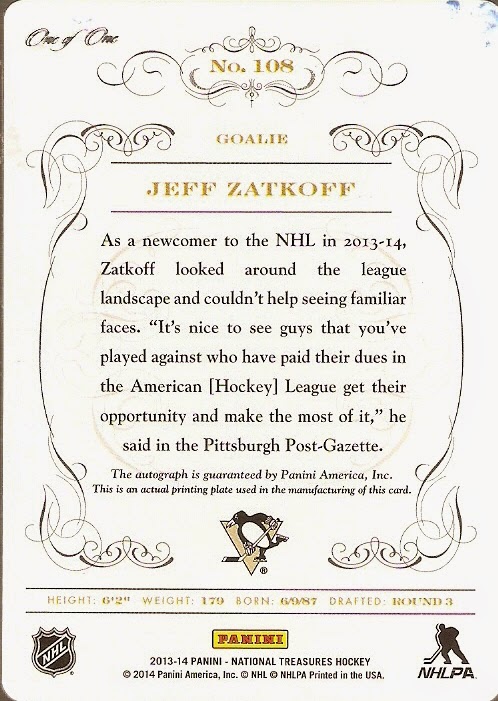 Time willtell on Zatkoff. He had a decent season last year, and is biting on the heels of Marc-Andre Fleury. Regardless of his long-term viability, this is still a great card, and one that I am more than happy to add to my collection.
Posted by Matt Pederson at 8:47 PM No comments: