I haven't quite picked up a hobby box of 2017 Heritage quite yet, but I plan on it. As a TTM collector, these are great for getting signed, and look great with some ink on them. Anyway, no hobby box quite yet, but I did decide to pick up a blaster box of Heritage, just to check it out.

This year's heritage takes after the 1968 Design, with the burlap border, and circle for the team name. As always, there are plenty of inserts and parallels. Here's a quick look at how I did.

After tehir 2016 World Series win, I'm expecting for this year's products to be flooded with Cubs cards, and as a Cubs fan, I'm absolutely ok with that. However, there were only three in my box:
Jason Heyward, John Lester & Jake Arrieta "Chicago Aces," and a chrome Kris Bryant. 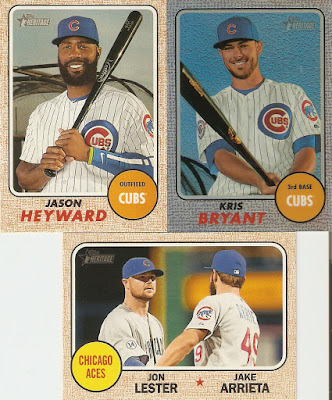 In addition to the three current Cubs, I also got three former Cubs with Jorge Soler, Starlin Castro, and Darwin Barney. 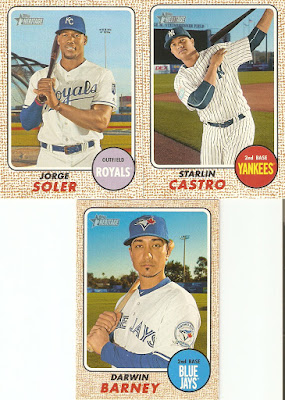 Out of the whole blaster, I only got one short print: Andrew McCutchen. It can make it really difficult to build the set this way, as 100 out of 500 are SPs. 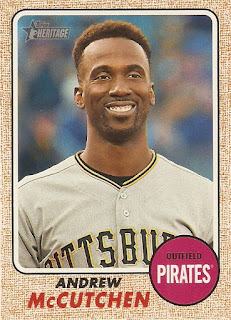 Foil cards fell at a rate of one-per-pack. I'm not sure if that's the official odds, but that's how it worked out for me. Kris Bryant was the big one out of these for me, of course. 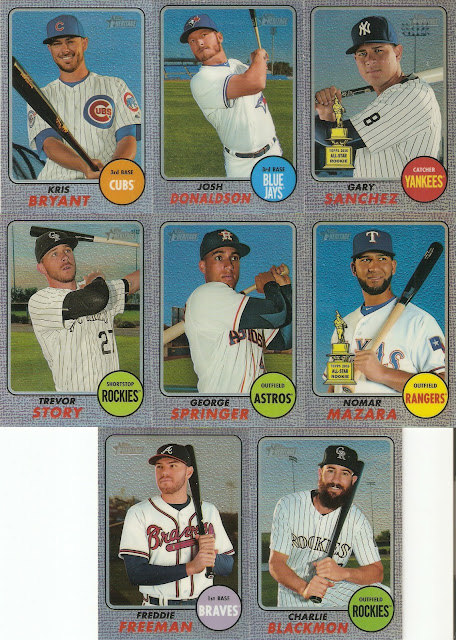 The last of the parallels is a mini of Carlos Beltran, numbered 87/100. Same as the regular cards, but, you know. smaller. 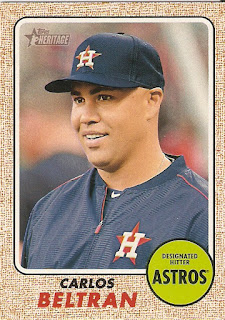 I got two Topps Game cards of Clayton Kershaw and Yoan Moncada. I know this is based off of the 1968 insert set, but I wonder if there are any official rules for an actual game that these cards can be used for. 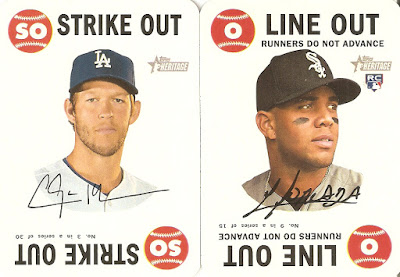 I also got one card from the Bazooka Mini set of Buster Posey. I know nothing about these cards, but I would guess that they came with Bazooka Bubble Gum.

Lastly, is a News Flashbacks cards featuring the Vietnam War. I like this insert set, as it gives you an idea of what was going on when this original 1968 set was released. 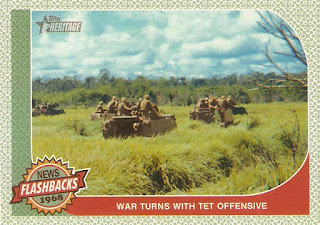 That's it for this one. I hope to get more in the future. I don't like all of the classic designs, but this is a great design that I don't mind seeing recreated.
Posted by Matt Pederson at 4:50 PM 5 comments:

A Pack of Cards from a Former MLB Player

A couple of weeks ago, I was vacationing with my family in Arizona, and my wife & I went to a couple Chicago Cubs games. At each game, Cubs great Fergie Jenkins hosts an autograph signing featuring a group of 6 or 7 retired Major Leaguers. One of those was former Chicago Cub Byron Browne. 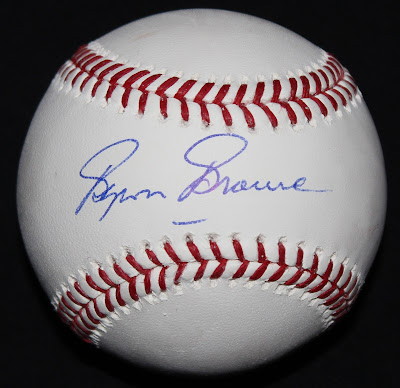 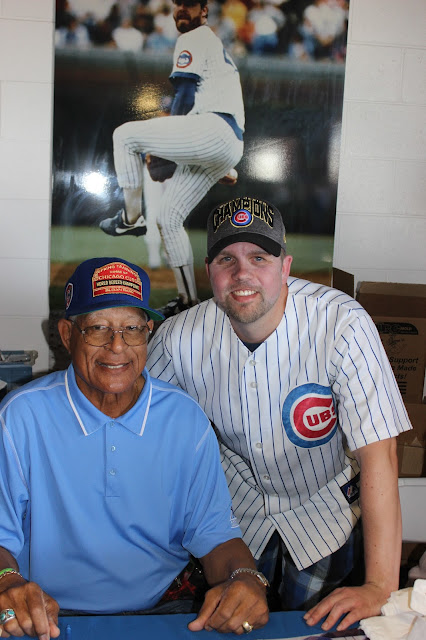 In addition to signing autographs, he was also handing out packs of baseball cards to kids who came by, after asking them a baseball trivia question. It was something nice, that he was doing on his own, to connect with the younger baseball fans.

Well, after having him sign a baseball and take a photo, he handed me a pack for myself as a bonus. So, here's what I got from my pack of 2016 Topps Opening Day, that was given to me by a former MLB player. 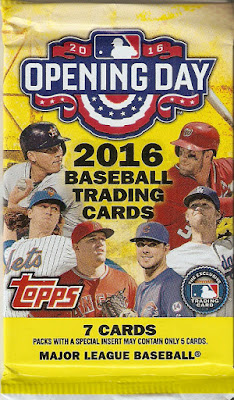 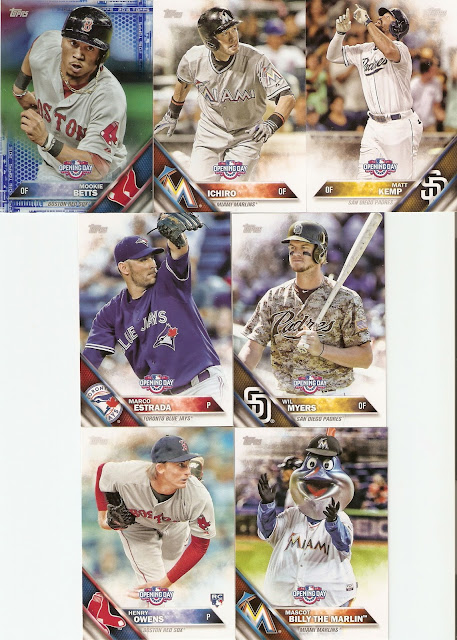 My wife and I had a once-in-a-lifetime experience at the Arizona Coyotes game Sunday night.

We are visiting from Minnesota, on our annual week-long vacation from Minnesota, and always like to go to a couple hockey games while we are here. We paid just $8 a piece for our tickets on StubHub for the game between the Coyotes and the Carolina Hurricanes. Seeing as though they are two of the worst teams in the NHL, the plan was to buy cheap tickets to get in, and then move closer to the ice in what should be a sparsely populated arena.

We were running late, because I misread the start time, and we could hear the radio commentary as we were walking around the arena to the front gate. As we were getting close to the doors, and passing the box office, someone asked us if we already had tickets. Thinking he was a scalper, I told him we already did. He told me he could get us closer, to which I informed him that while we had some seats up high, we were planning on moving closer anyway. Again, I thought he was a scalper. He then replied with, "You don't understand. We want to upgrade your seats. To the front row." I looked closer and saw that he had an Arizona Coyotes nametag on his sportscoat, and knew that this was for real, and we were getting on-the-glass seats!


We went through security, found our section, and were in our seats with 6 minutes left in the first period. The score was still 0-0, so we hadn't missed too much action, which was good. I had never sat that close to the ice before, and had always wondered if the seats were too close to really catch all of the action that happens during a hockey game.

Our seats were just a little bit off of the offensive zone faceoff circle, toward center ice, in the direction the Coyotes would shoot twice. Of course, your visibility is somewhat limited when the action is on the other side of the arena, but it is never obstructed. When it gets to your side, however, it's a completely different story. You can see the plays develop in a different way. You can see players' reactions. The players are so close, you can almost touch them. You can actually see the faces of the players, up close and personal. It's a completely different experience, and a whole new way to watch a hockey game.

The Coyotes ended up losing the game 2-1, but we both still had an amazing time. Being a hockey fan on a budget, I don't know if this is an experience we will ever have again, and we were absolutely sure to enjoy every second of this.

Here's a few photos of the evening: 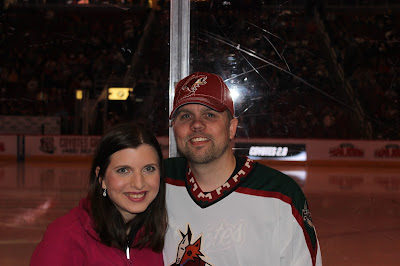 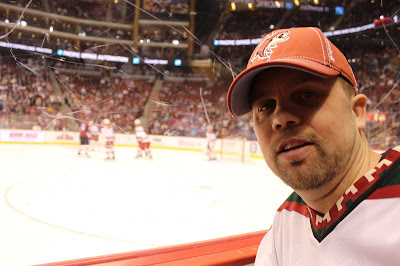 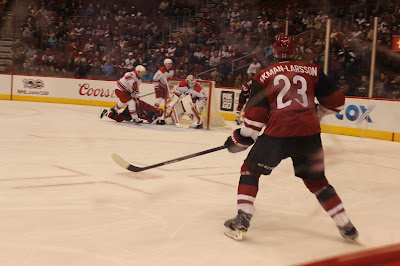 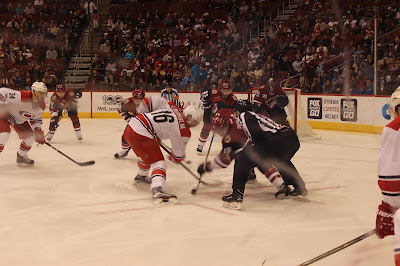 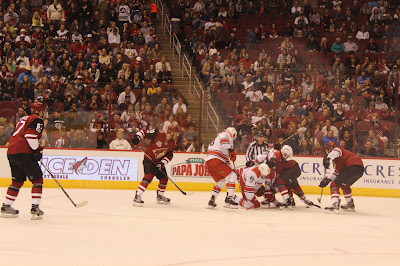 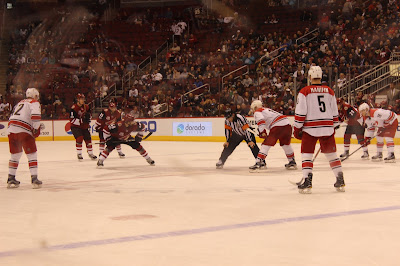 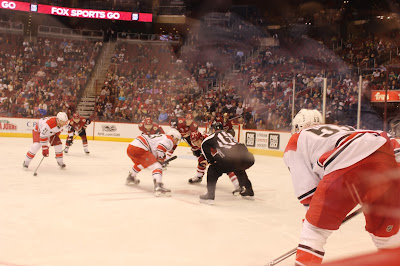 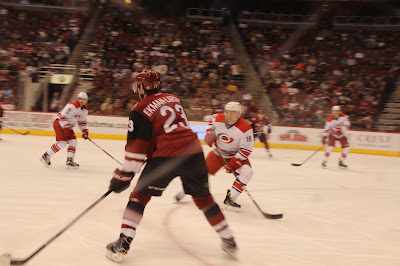 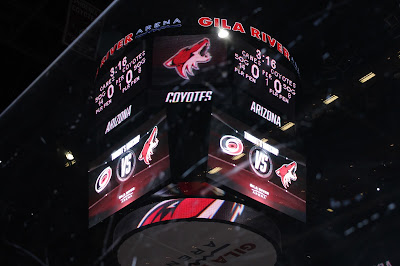 (I also got a few autographs after the game, but I'll be posting those on my memorabilia blog, Not Pulled From Packs, when we get back home).
Posted by Matt Pederson at 12:12 AM 4 comments: