Hey everyone, Sam at The Daily Dimwit is hosting another multi-box group break for six boxws of 2010 Bowman Platinum. The set includes rookie cards and "first cards" of players such as Starlin Castro, Stephen Strasburg, Jason Heyward, Aroldis Chapman, Jeremy Hellickson, and a whole lot more. Slots are only 20 bucks a pop, and there are some multi-team slots available. With 6 boxes busted, 24 hits will be available, so check him out and jump on in to a VERY promising break of cards. 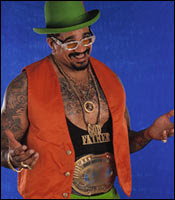 Posted by Matt Pederson at 8:45 AM No comments:

Despite not writing for a LONG while, I can assure you, I am still here. I have also been pretty active in the hobby, picking up some retail, bidding on some ebay, and partaking in some cool group breaks, like a couple put on by Colbey at Cardboard Collections. The first break was for boxes of 1996 and 1997 Fleer baseball. Natually, I picked the Cubs. Got me a couple Rynos that I didn't have already, plussome cards of Sosa and Grace. 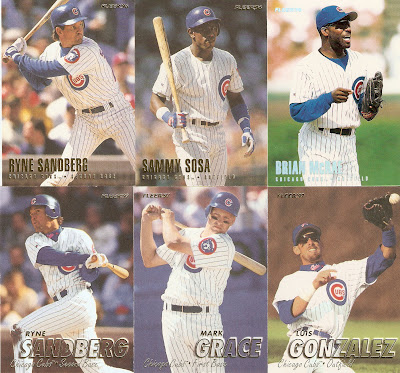 And as usual, Colbey threw in a couple of random cards from the team, which included a 2011 Bowman Platinum Starlin Castro that I was VERY excited about. 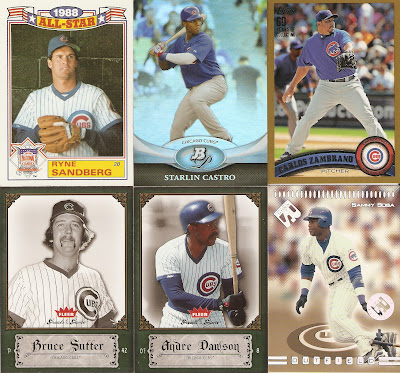 Colbey also did a break of 2011 Topps Marquee. He opened a half case (12 boxes) and I picked my Cubbies. After the person who picked the Yankees dropped out, I decided to grab them up, too, since there would be plenty of base cards, and possibly, hits, from the boys in pinstripes. Luckily, I did, bcause the two best cards, value-wise, were yanks: a Mickey Mantle gold parallel numbered to 99 and a SWEET looking Paul O'Neill on-card auto numbered to 75. To be quite honest, my intentions were to try an flip any Yankees hits on ebay to make back some money spent on the break, but as good-looking of a card as this O'Neill is, I might just have to keep it. 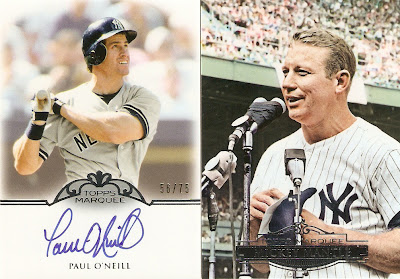 Here's a look at the rest of the Yankees cards I got from the base set. 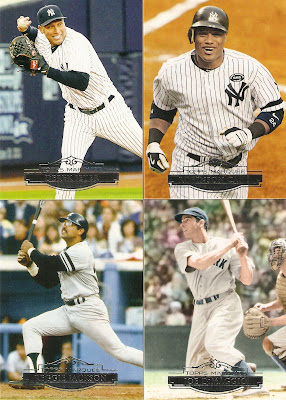 I'll probably keep the Jeter, but the rest are up for trade if anyone has something cool to send my way.

The other three teams I had ownership of were my Cubs, the Twins and the Mariners, which netted me a total of one card each. Still, looking at the three I got, I could have done much worse.

Thanks for a great couple of breaks!

Be sure to check out Cardboard Collections and keep your eyes peeled for the next group break he puts together.
Posted by Matt Pederson at 12:15 AM No comments: