Well, three weeks into the new year, and I finally picked up my first hobby box. I actually went into my LCS with baseball on my mind, but there wasn't much available, due to it being in between seasons right now. I was, however, able to find some 2016-17 Trilogy Hockey, and figured I'd give that product a try.

I did well on my base cards, with both of my Penguins, as I was very happy to get both Sidney Crosby and Evgeni Malkin. I also pulled Ovie and Connor McDavid. With McDavid now, it is interesting, because after a year where anything you pull of his was a monster hit, now it is just another base card. 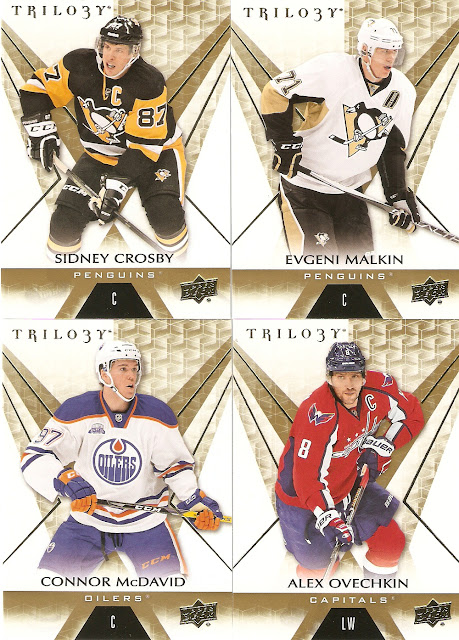 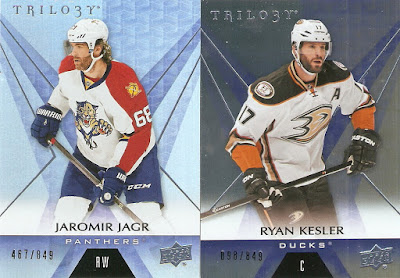 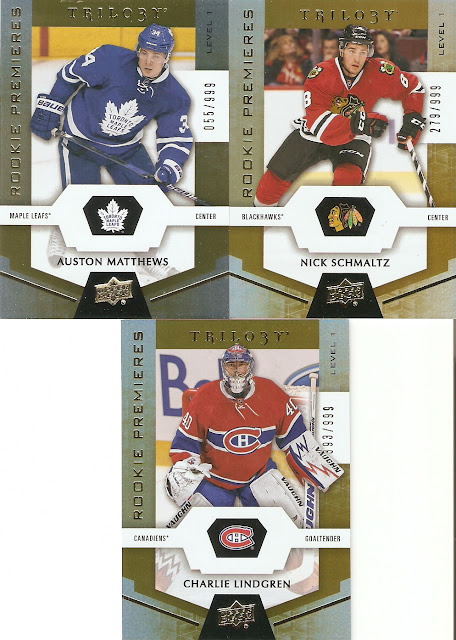 As far as the hits go, I think I did pretty well. According to CardboardConnection.com, the only thing guaranteed is two autographs, so the fact that I hit two autos and two memorabilia cards, makes me think I did really well. Anyway, here's what I got:

Aleksander Barkov jersey 20/381. It's great to get a card of a former 2nd overall draft pick, but the numbering is kind of weird. 381 seems like such an odd number, but I'm sure there's some significance to it. 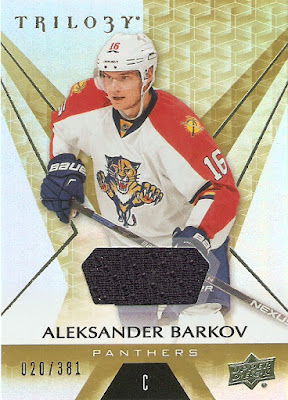 Ryan Pulock Rookie Premieres Autograph (Level 2) 240/275. With Trilogy, the higher the "level," the closer of a player photo you get, and a lower serial number and all of that. Anyway, Pulock has played just one NHL game this season, spending most of the year with the AHL's Bridgeport Sound Tigers. 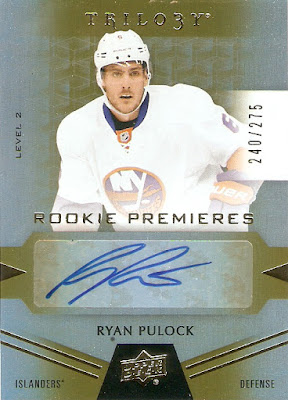 Patrick Laine Rookie Premieres Jersey (Level 1) 83/399. This is a really good one, as Laine, 2016's second-overall draft pick, has proven to be one of the hottest young stars in the game. So far he is only one point (37) and one goal (21) behind Auston Matthews and is giving him some stiff competition as 2016-17's top rookie. 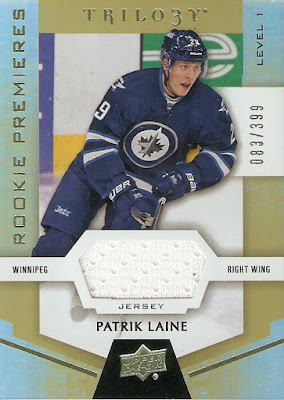 Ryan O'Reilly Signature Pucks. This, for me, is one of the unique things about trilogy. Each of these cards contains a piece of rubber that is meant to symbolize a hockey puck. In past years, there were logos printed on the "puck," with a gold signature. I'm a little bit torn on this, as I liked having the logo there, in the same way I like them on my actual autographed pucks. On the other hand it does do a much better job of spotlighting the signature, and the silver ink stands out much better than the gold of previous years. 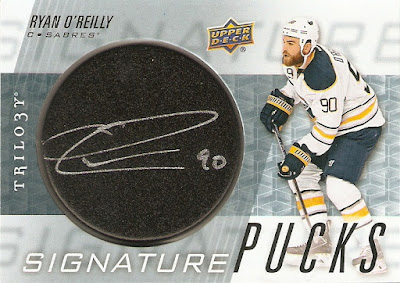 Considering the fact that I got four hits (plus an Auston Matthews rookie) for the price I paid, I would say this is definitely a great product to break. I'm not sure if I'll do any more, but I was very happy with what I got here.
Posted by Matt Pederson at 1:43 PM 3 comments:

Well, my patience finally paid off, and in a big way.

For the last few months, I had been eyeing a particular card on Ebay to add to my Zach Parise collection. This one comes from 2011-12 Panini Prime's Captain's Cloth insert set, and features the top half of the "A" from his New Jersey Devil's jersey, when he served as alternate captain of the team. The Catain's Cloth cards feature about as large of a swatch as you could possibly put on a cards, and these, specifically, feature half of a player's captaincy designation. The size and scope of these give these such an amazing look, no matter what team it is, and the fact that it is limited to players serving those roles means that every single one is of a player of major prominence. Of course, each of these are serial-numbered to two, and both cards will make a full letter. 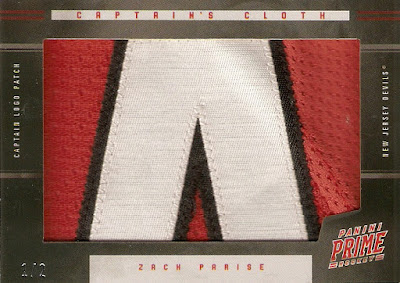 It took patience and timing to get this card. I first came across it on Ebay a couple months ago, but the price was a little high for what I wanted to spend at the time ($200), and it was high enough that I didn't think people would be jumping over each other to pick it up. As time would go on, the seller would have sale prices at various amounts, and there were a couple that I would have been ok pulling the trigger on, but as the timing went, I wouldn't have the necessary Paypal available to purchase it. Well, a couple weeks ago, the timing and the availability worked out perfect, as it was relisted at a $50 percent discount. I jumped at it as soon as I saw that, and two weeks later, this beauty came to me all the way from Russia.

This was certainly one I didn't want to miss out on, but luckily, all the circumstances worked out in my favor. Now, I just have to track down the bottom half of the "A."
Posted by Matt Pederson at 4:41 PM No comments:

I have, so far, opened up two tins of Upper Deck's super high-end product, The Cup. The first one was the 2012-13 release, and then again for 2014-15. It is a very pricey product, with some major hits in it, and the most valuable rookie cards you will find all year. I might have to sit this year out, though, as Connor McDavid's rookie year has jumped the price up to $700 for a six-card tin. Yikes!

Still, you can pick up some singles for a pretty decent price, and I was able to grab my first one with this Marc-Andre Fleury autographed patch card 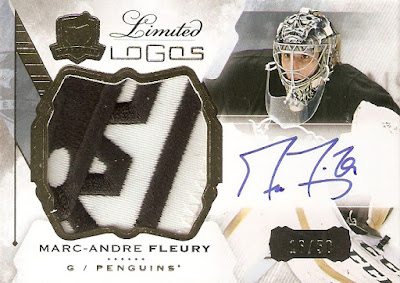 This card comes from the Limited Logos set and it serial numbered 16/50. It is signed right on the card, and features a large piece of the patch from the front of the sweater. I suppose the idea of "Limited Logos" is to be sure that the patch is from the actual team logo, instead of a number. Once I saw this card, I just had to have it, especially considering the patch. It comes from the skate of the penguin, and there is a great amount of detail shown here. Some patches are better than others, but as far as this team goes, it doesn't get too much better than this.
Posted by Matt Pederson at 3:54 PM 2 comments:

I picked up one of those autographed card repacks from target. Basically, you get four retail packs of cards, and one autographed card is inserted seperate from the packs. I'm sure a lot of what you'll find is rookies from a few years ago who didn't quite reach hockey stardom, but it's still a fun box to open with low lost and almost no risk 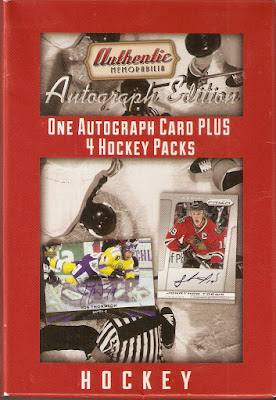 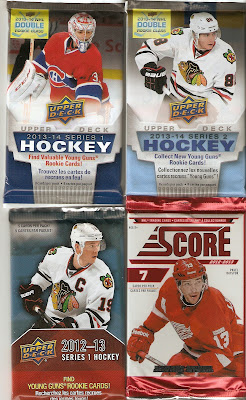 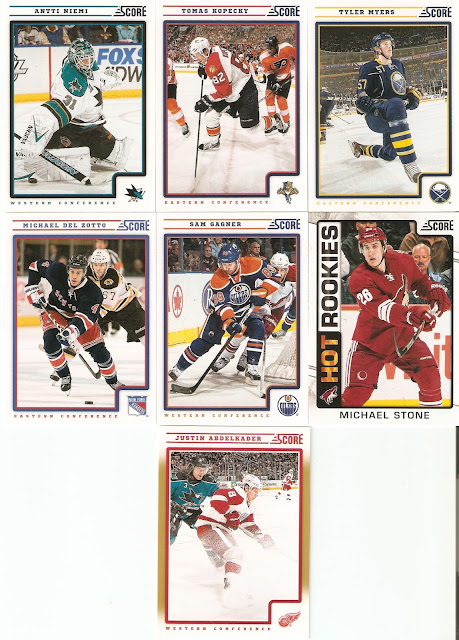 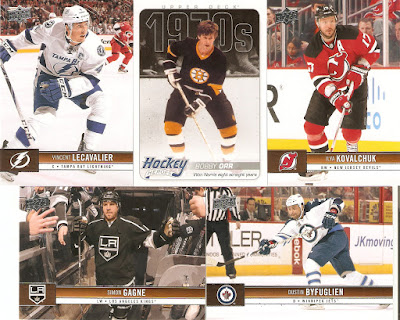 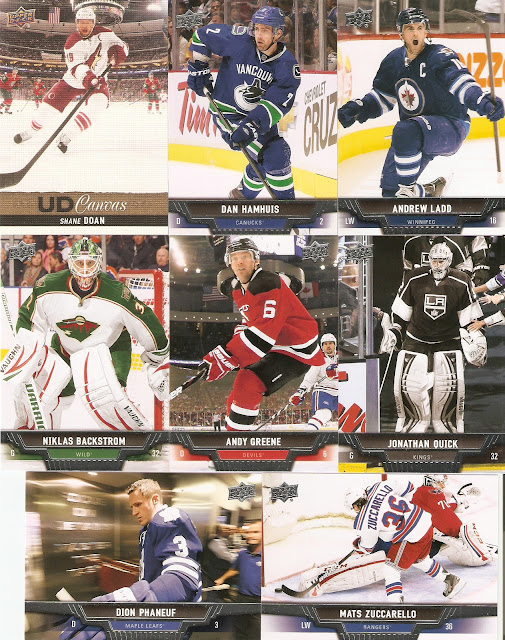 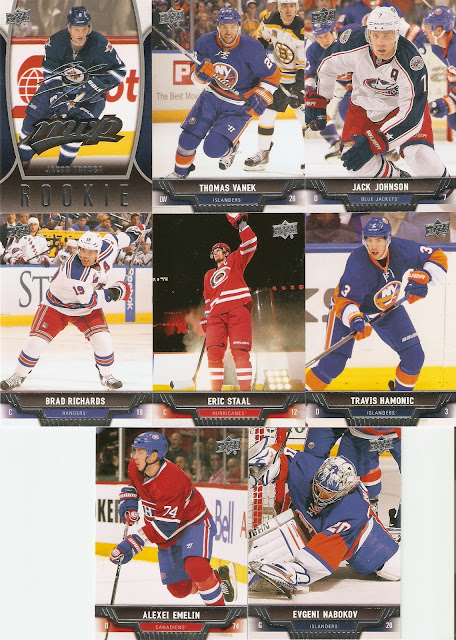 My autographed card is of Ben Holmstrom from 2013-14 Select. Holmstrom played a total of 7 NHL games in the 2011-12 and 2012-13 seasons, and has been in the AHL ever since. He is now with the New York Islanders organization, and is captain of their AHL team, the Bridgeport Sound Tigers. 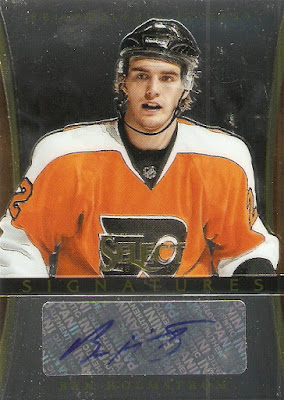 Posted by Matt Pederson at 9:28 PM No comments:

I always love Secret Santa exchanges in general, and got a great chance to participate in a hobby-related one this year, as Matt from Bob Walk the Plank put one together that featured, I think, somewhere around 30 participants. My package came from Brian of Highly Subjective and Completely Arbitrary, and included a good mixture of what I collect.

First of all, there were two packs of hockey cards, a 4-card retail pack of 2015-16 Upper Deck Series 1 and a 34-card jumbo pack of 1991-92 Topps. I only scanned the highlights of the Topps pack, which included one of my favorite cards from the set, Joe Mullen. I always love cards of players hoisting the Stanley Cup, especially when that player is a Pittsburgh Penguin. 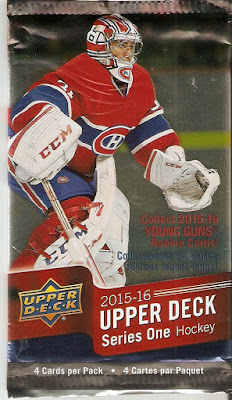 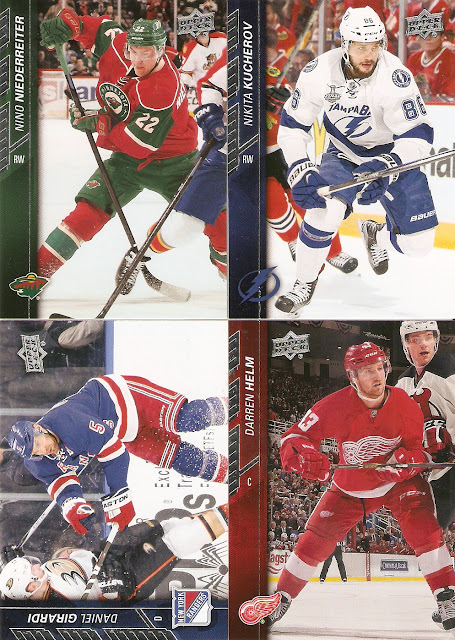 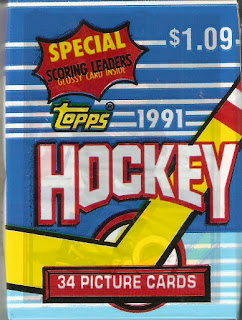 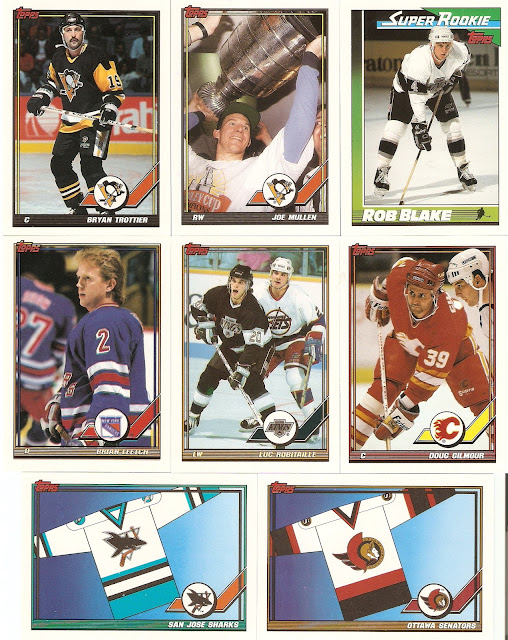 There were also a few cards of players from the Minnesota Wild (and one former Minnesota North Star). 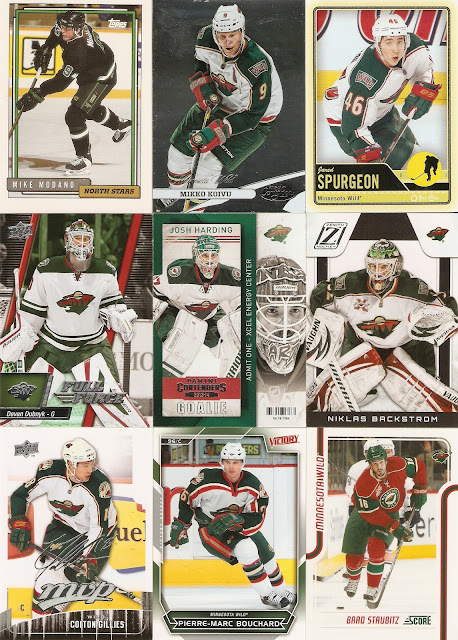 I was also happy to find some of my set needs for my Allen & Ginter sets. Going through these made me realize that it has been FOREVER since I have updated that page, I really need to whittle down what I am going after, as I still have some up that I haven't thought of in years and abandoned long ago. Still, I will always be going for the Allen & Ginter cards, so receiving these was just perfect. 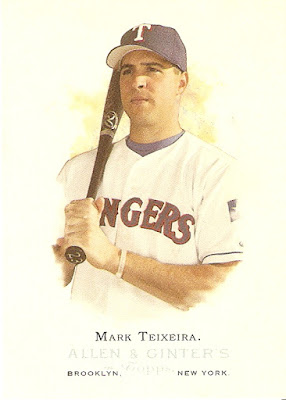 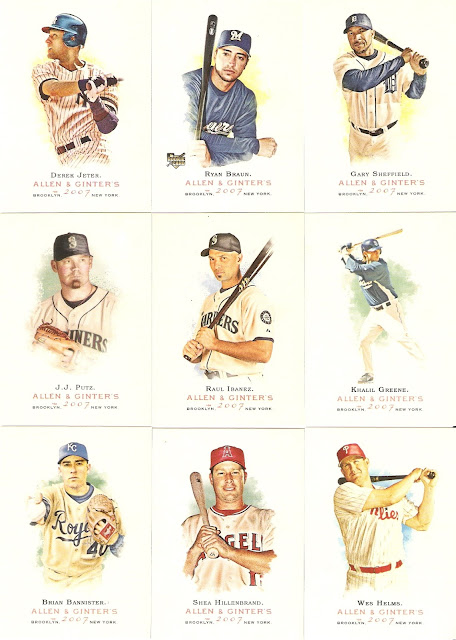 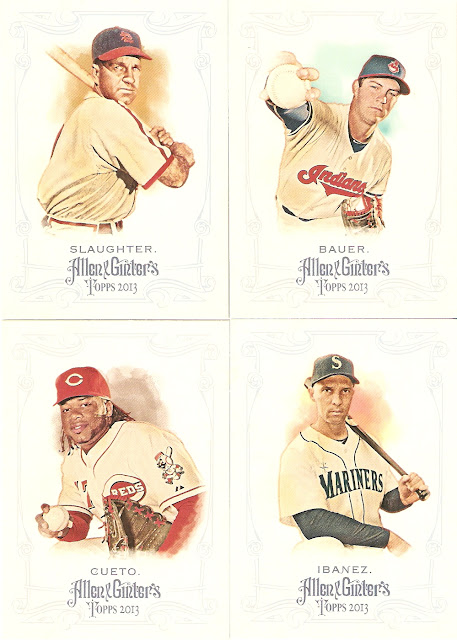 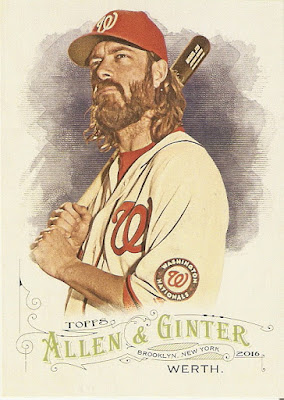 Lastly are three cards for my Baseball Hall of Fame Relic Project. Basically, I am going after a memorabilia card of every player inducted into the Baseball Hall of Fame. I'm also doing an autographed version of this, too, but the memorabilia will be easier (and MUCH cheaper) to collect. Also, even though Molitor went in as a Brewer, as a Minnesota resident, I really appreciate that this card is of him as a Twin. 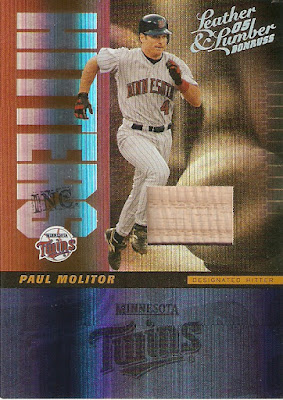 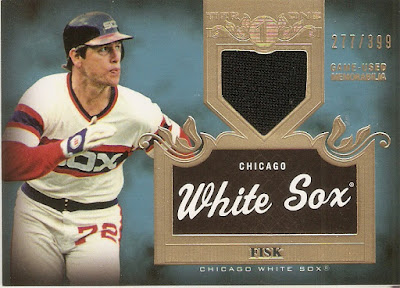 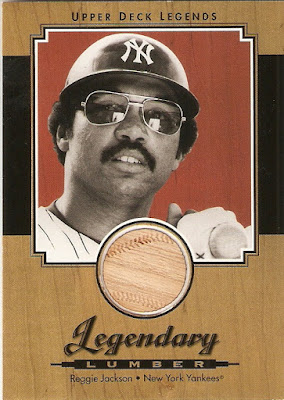 These cards were all amazing. Thank you to Brian for the thoughtful gifts, and here's to an awesome 2017!
Posted by Matt Pederson at 9:28 AM 2 comments: