I always like end-of-the-year contests, especially this year, when my content hasn't quite been what it used to be. With my collection taking a direction toward in-person and TTM autographs and memorabilia, my card buying has dwindled a little bit. I still love the hobby, though, and with Eamus Catuli! asking for everyone's favorite card of 2016, it gives me a great chance to show off a card that means relatively little to most people, but is really cool to me.

While my card-buying has decreased this year, I still have had some great pulls, like my Connor McDavid Future Watch autographed card and my Evgeni Malkin autographed dual jersey card, but this isn't about my best card of 2016, it's about my favorite. 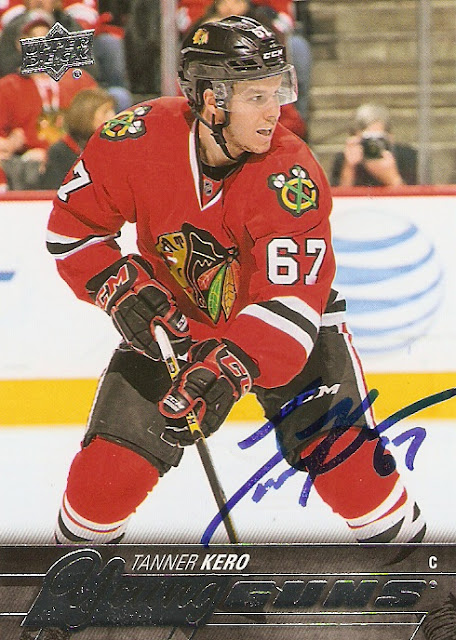 As far as I'm concerned, this is such a great card, because Kero is one of a very small list of alumni from our local USHL team, the Fargo Force, to make it to the NHL. Kero played just one year in the USHL before attending Michigan Tech for four years of college hockey, After his college days were up, the Chicago Blackhawks signed him to a contract, and he would eventually make his NHL debut on October 29, 2015. He would play 17 games in the NHL during the 2015-16 season, scoring one goal and two assists, He has spent the 2016-17 season with Chicago's AHL affiliate, the Rockford IceHogs.

So far, the Fargo Force have had five alumni make it to the NHL: Nate Schmidt (Washington), Luke Witkowski (Tampa Bay), Christian Folin (Minnesota), Kero, and most recently, Zane McIntyre (Boston). It's always great to see a guy from the local team make it to the NHL, especially since so few of them ever do.

Oh, and if you noticed the blue ink on this card, it was signed by Kero through the mail toward the end of the 2015-16 season. He was also nice enough to sign a puck for me, as well. 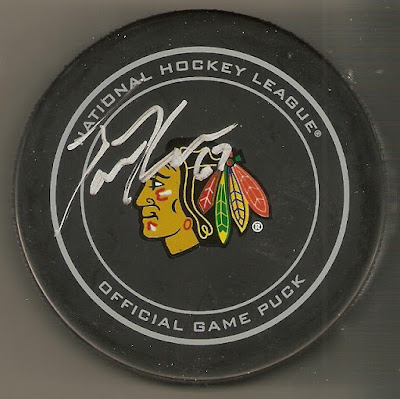 Well, there you have it. A card that might not mean a whole lot to some people, but means a whole lot to me.
Posted by Matt Pederson at 8:20 PM 7 comments: