Most of the time, I'll buy a card for a purpose. Either it's a player/team I collect, a set that I'm working on, or I'm getting ready to send out some TTM requests. Other times, however, I buy a card simply because it looks great and is at a good price. This is one of those cards. 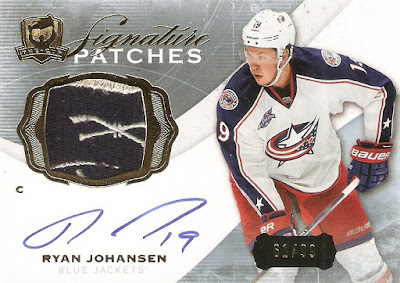 From 2014-15 The Cup, this is a Ryan Johansen Signature Patches card, numbered 61/99. The patch itself appears to come from the Civil War hat located on the shoulder patch, and it features what is known as one of the worst-looking signatures in the NHL today. It is up for trade if anyone is interested, and if not, I'm perfectly content keeping it.
Posted by Matt Pederson at 11:07 PM 2 comments:

So, after a couple of years of collecting Sidney Crosby, I decided I needed another player to pursue in my card collecting. He's an expensive player to collect, for one, and two, since his cards have such a high value, when extra funds are needed, his are the first to go. Earlier this year, my family and I were taking a trip down to Texas to visit family, and since money was tight, my Crosby collection ended up stripped of its better cards in order for us to afford it. Now that that took place, which I had no problem doing, would come the task of replenishing the autographs that were sacrificed. The problem is, with my growing collection of in-person autographs and memorabilia, there isn't really as much funds as there used to be to spend $100+ on one autographed card.

I want collecting to be fun, and I want to have a player who I can get some amazing cards of at a great price, and I need it to be a player who has enough cards produced every year, so that I can continue to pursue some great-looking cards as each set is released. Well, after an autograph signing last month, and that fact that I already liked him quite a lot anyway, I have found that player. 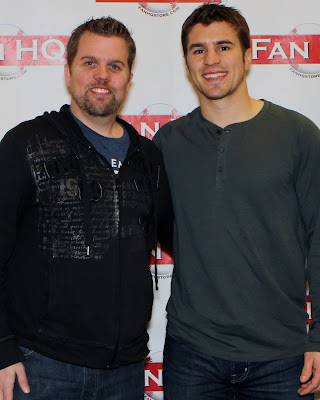 Living in Moorhead, MN, with family hailing from neighboring North Dakota that not only borders my state, but my town, I claim allegiances to both, and Zach Parise is the perfect player for me. He grew up in Minnesota, as his dad, J.P. Parise, played for the North Stars, and played college hockey at UND in Grand Forks, ND. After two years in college, Parise signed a contract with the New Jersey Devils, where he would play for his first seven NHL seasons, before returning home by signing a contract with the Minnesota Wild. He also represented Team USA that the last two Olympic Games, serving as alternate captain in 2010 and captain in 2014.

As detailed in my memorabilia blog, Not Pulled From Packs, I had the opportunity to meet Parise at an autograph signing last month. Minneapolis/St. Paul is about a 3.5-hour drive from where I live. I have no problem making that drive, but for me to convince the wife that such a trip is a good idea, and for us to arrange all-day babysitting for our three girls, it has to be for someone big, or at least a big event. This one would definitely qualify for me, and the fact that my wife is familiar with Parise helps convince her that this is a big deal, so we were off.

What sealed the deal for me on Parise, was simply just how nice he was. I have never been to a signing where the guest is a complete grouch, although I have heard of it, but I have been to signings where the guest treats it like a job. Not that they are miserable to be there, but they are just there to essentially, punch a clock, do their job, and go home. Parise, on the other hand, I have heard is truly nice to his fans, and I have heard as much from quite a few people over the years. During the photo session portion of the event, I must have been the 100th or so person Parise took a picture with, but he still had a smile on his face, was conversational, and offered his hand for a handshake as I was walking up, before I even had the chance to offer mine. He is a true gentleman, and that in-person experience sealed the deal for me.


I already had a few Parise items in my collection, and now have a few really great ones on the way, but here's a quick look at what I have so far: 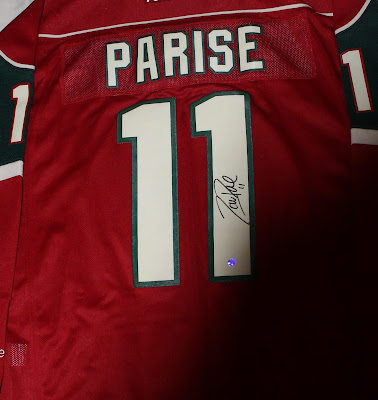 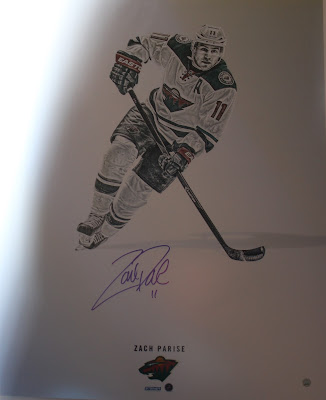 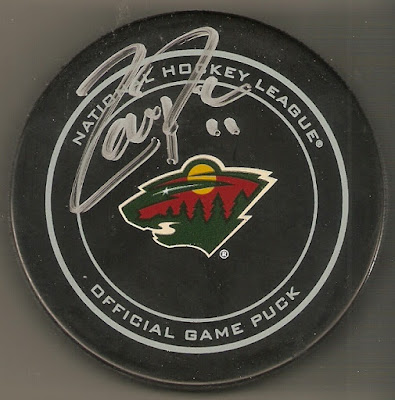 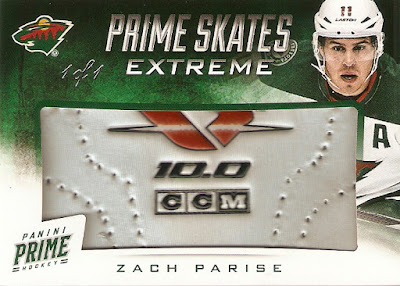 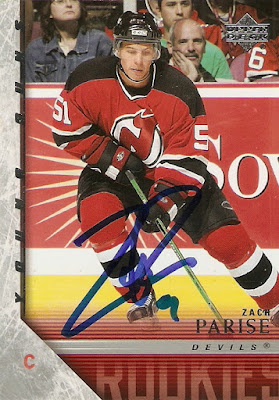 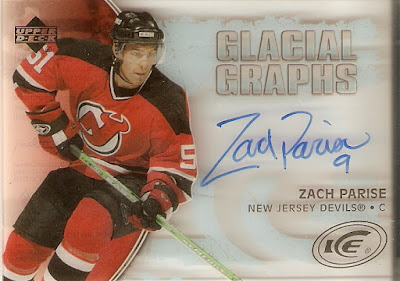 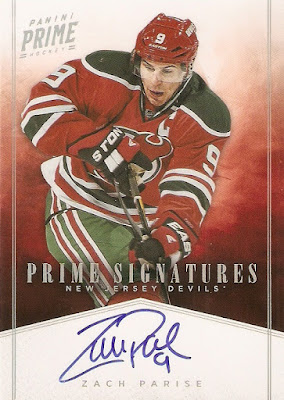 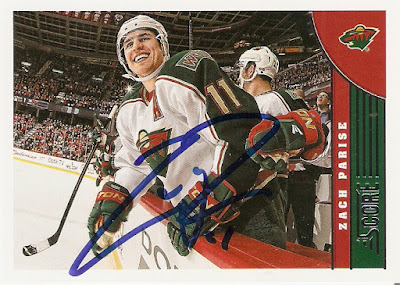 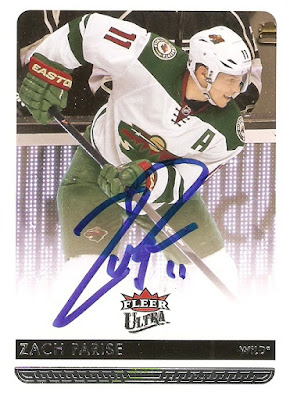 That's what I have so far, with more one that way. As always, if anyone has anything I can add to it, please let me know!

Posted by Matt Pederson at 10:33 AM No comments:

After not too long of a wait, I got the redemption for my Valeri Nichushkin Prime Quad Rookies card that I pulled from a box of 2013-14 Panini Prime a month or so ago. This one features an on-card autograph, as well as four jersey swatches, and is numbered 177/199. 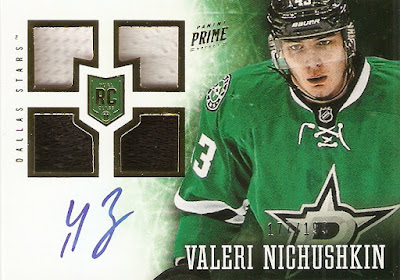 While I tend to not like white jersey swatches so much, the fact that they are accompanied by the black helps. I also like that the texturing of the fabric is going in different directions, which lets you know that there are four pieces of fabric, instead of two larger ones. It's a small detail that might not matter to some, but it makes a difference to me.

I'm still waiting on the other redemption, which is a dual autographed card of Gordie Howe and Steve Yzerman. Depending on who they are waiting on with this, I'm not sure if it'll ever be returned, considering Howe's health issues. Part of me is willing to wait forever if I need to, but another part is considering asking for a replacement, just to see what such a high-dollar card could get me in exchange. I'm playing the waiting game for the time being, but my curiosity has definitely been sparked.
Posted by Matt Pederson at 10:37 AM 1 comment:

While perusing Ebay a while back, I came across a Pittsburgh Penguins mini goalie mask, autographed by Marc-Andre Fleury. Everything looked legit with it, and the bidding price was still low, so I decided to go for it. I ended up winning, and the best part is that as a "bonus," the item also included three autographed Manesakes cards from 2013-14 Panini Prime.

These cards feature a manufactured letter patch meant to represent the player's name plate, are numbered /25, and are autographed right on the letter. This one in particular is designed to resemble the nameplate on the back of the 2011 Winter Classic jerseys that would also become the team's alternate jerseys for the next two years. The letters I got were F (12/25), L (10/25), and U (25/25).

Here's a look at the cards:

Now, I'm not sure is there are only 25 cards total of all the letters, or if each letter has 25 copies, but either way, now that I'm halfway there, I have to complete this set.
Posted by Matt Pederson at 5:41 PM No comments: