Now that they have the exclusive NHL license, Upper Deck has had some room to introduce a few new products to the market, one of those being Contours. I'm not sure what the "theme" of this release is, other than every card is die-cut. They also have included some hits from famous fans, so I guess this is Upper Deck's answer to Panini's Crown Royale. Either way, I decided to pick myself up a box, and here's how I did.

Here's a quick look at the base set. It's the typical player image in front of a photoshopped background, and the "contouring" takes place right above the silver foil on top of the card. 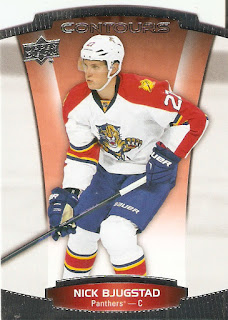 Of course, there are parallels, as well.As an added bonus, they also die-cut the sides of these cards to give them that extra bonus beyond just different-colored foil.
Steve Yzerman 121/499, Andrew Ladd 116/499 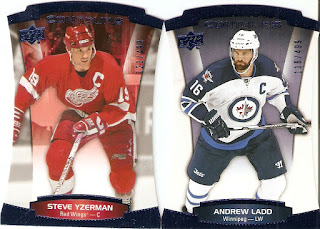 Rookie Resume Connor Hellebuyck  286/399
The rookie Resume cards are an insert, of course, but I'm not sure if they really provide anything different than the base cards, apart from a serial number and a lack of die-cutting. 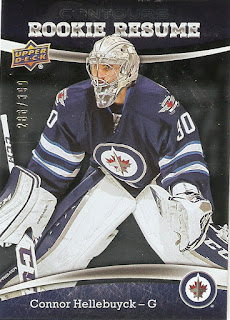 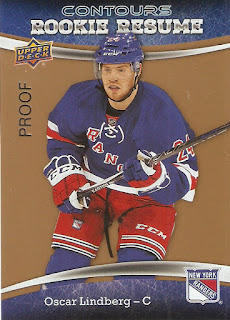 Youth Movement Sean Couturier 307/399
The Youth Movement autograph cards, I think, focus on the younger players in the league. Although I hate the Flyers, you could do much worse than pulling Couturier. 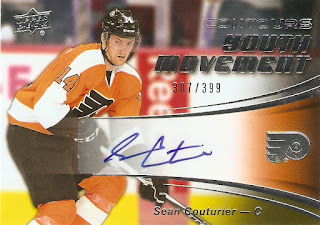 Oscar Lindberg Rookies Auto 328/499
These are the rookie cards for the set. 30 cards feature just an autograph, and 30 feature an autograph and a jersey swatch. Not a bad hit at all, but like the Couturier above, it is a sticker auto. 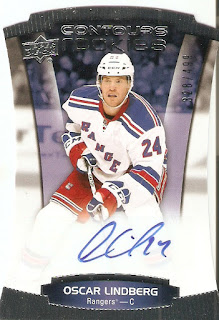 High Profile Fans Larry King Jersey
This is what I think is kind of cool. They have included a few celebrities from outside of the hockey world who are huge fans as hits in the product. While I am not a huge Larry King fan, in particular, I do love that Upper Deck tried to do something different with this product. 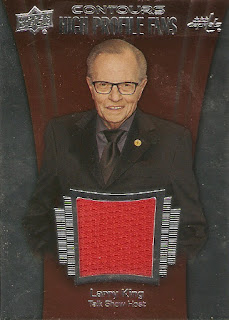 High Profile Fans CM Punk
The High Profice Fans cards are inserted at a rate of 1:41, so it's nice to grab two of them in my 4-pack box. As a massive fan of pro wrestling, that fact that I grabbed a card of one of the most prolific wrestlers of this era, is even nicer! Looking at King & Punk, though, I do wish Upper Deck included a short write-up on their fandom in the text on the back, instead of just their accomplishment in their particular lines of work. 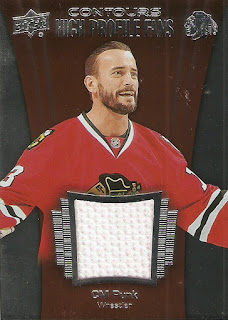 Day With the Cup

I was overjoyed back in June when the Pittsburgh Penguins won their fourth Stanley Cup, but it keeps getting better. Matt Cullen, who is from Moorhead, MN, was a key part of the team throughout the regular season and playoffs, and brought the Cup back home to share with the community last weekend. My family and I live right here in Moorhead, so we had the wonderful opportunity to see the Cup. My wife and I dropped our girls' off at my parents' house, and were on our way.

I was expecting just to be able to look at it, and hopefully, take a picture with it, which would have been incredible just by itself. However, as we got closer, I noticed that Cullen himself was right there with it, taking pictures with every single fan right next to the Stanley Cup. After an hour and a half in line, there we were. 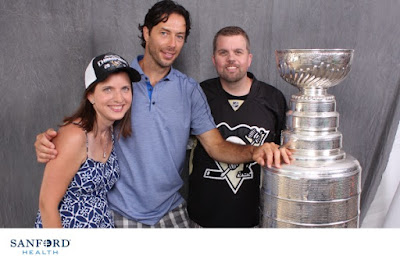 It really was an impressive operation they had set up. In order to get as many people through as possible, they hired two professional photographers, and assembly-lined everyone through. Pictures were then uploaded almost immediately to a computer station, where they did the necessary cropping, and printed up a 3x5 for each person in the shot, as well as e-mailing a digital copy for social media use.

After having some time to share the Stanley Cup with his family in the morning, Cullen took it to visit children involved with his "Cully's Kids" charity, which helps battle childhood cancer, then brought it to the Moorhead Youth Hockey Arena, where he shared it with local youth hockey players. After that, it came to a tent set up outside the arena, which is where my wife and I saw it.

It may have been Matt Cullen's "day with the Cup," but I was so grateful for the opportunity for my "moment with the Cup."
Posted by Matt Pederson at 3:53 PM 3 comments: