For me, it has actually been years since I went to my LCS for some unopened cards, but on an excursion to the mall last week, I decided to stop in. I was a little taken back by some sticker shock, when I saw some of the prices on even just the Topps Baseball product. Maybe it has just been that long, but I don't remember single packs of Topps' flagship release being quite that high.

Either way, my eyes quickly made their way to their WWE product. Eventually, I decided to try my luck on a box of 2020 Fully Loaded. This is a high-end release from Topps, and each box includes just one fully-encased and sealed autographed card of a WWE superstar. I did pretty well with mine, too, pulling a Renee Young autographed kiss card, numbered 9/25. 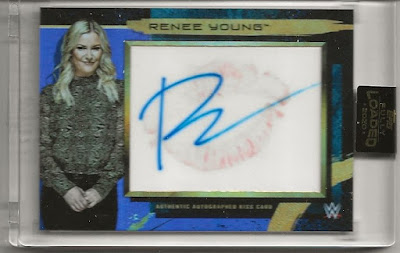 Renee Young was along-time WWE employee, starting as a backstage interviewer with NXT, and eventually doing commentary for matches. In 2018, she became the first woman to call an entire episode of Monday Night Raw, and soon became a full-time member of their commentary team. Most recently, she hosted WWE Backstage, alongside a rotating cast of co-hosts that included Paige, Booker T, and CM Punk, among others. Soon after the show's cancellation last year, she left the WWE, and now goes by her real name of Renee Paquette.

Posted by Matt Pederson at 1:13 PM