In addition to the two packs of WWE Undisputed that I picked up at my LCS last week, I also grabbed a box of 2017 Donruss. I really went there in the mood to buy some baseball cards, especially considering that I need to build up my recent stock in order to send out some TTM requests. Donruss definitely gave me that.

Each box of Donruss contains 24 packs of 8 cards, and LOADS of inserts. Each pack will have at least 2 inserts or parallels, which can be a lot for set-builders who would rather just have the base cards. In addition to those, each box is guaranteed to contain three autograph or memorabilia cards, which isn't bad for the price point.

Anyway: here's how I did:

Base Cubs: I got a total of nine Cubbies from the base set, including my childhood favorite, Ryne Sandberg. The cards are meant to emulate the 1990 design, with a few alterations, like the logo, the color, and the use of stripes instead of paint splotches. Still, it's a design I have always liked, and one that I don't mind seeing modified for a current release. 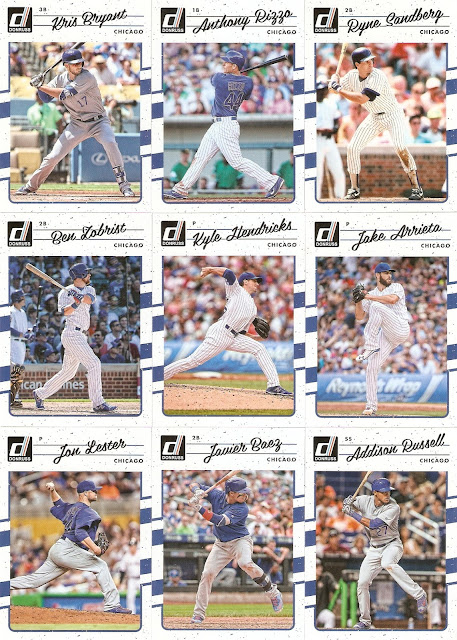 Of course, like any respectable Donruss release, cards 1-30 are set aside for each team to have their Diamond King card, which has one featured player from the team in some sort of artistic interpretation. I got six, but unfortunately not the Cub, Anthony Rizzo 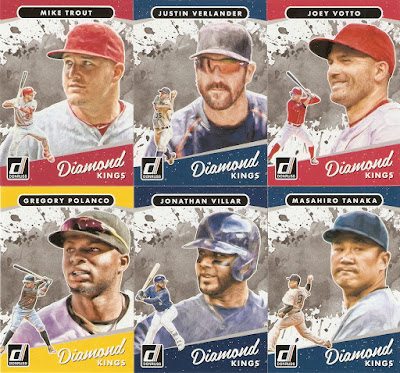 After the Diamond Kings, the next 15 cards in the set are Rated Rookies, which is a tradition carried over from many years of Donruss baseball cards. I did ok with these three, but I LOVE how the Rated Rookie logo has remained the same. 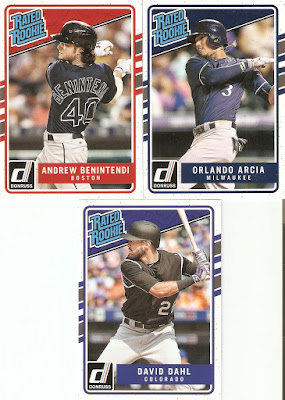 Like I said earlier, there are PLENTY of parallels, and I got quite a few: 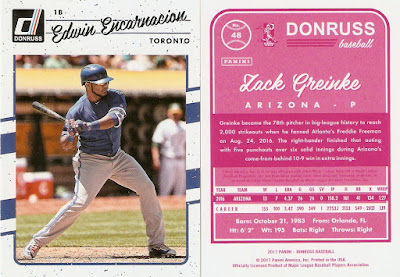 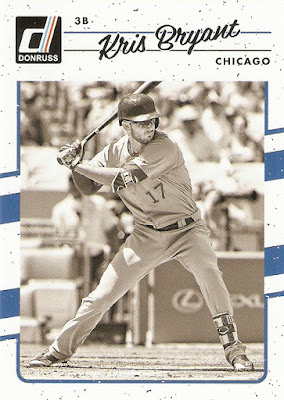 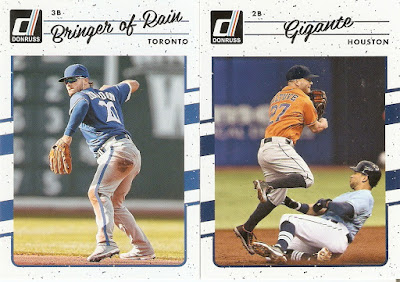 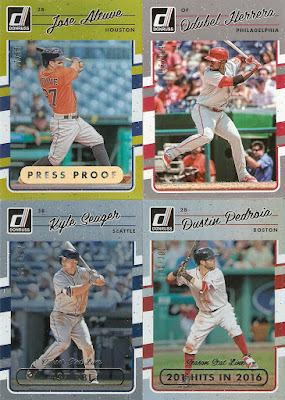 Donruss has also brought back "The Rookies" as an insert set. I got four total, including a blue-back parallel of Tyler Glasnow. 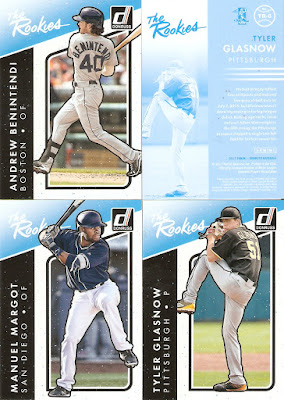 There were also four cards from The Prospects insert set, including a gray-bordered parallel of Victor Robles, numbered 6/199 and a base insert of Cubs prospect Eloy Jimenez. 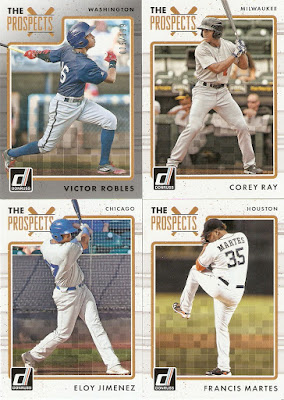 Donruss also went back to their 1983 design with the Retro Variations. I'm assuming that every base card has one of these, but I'm not sure. I pulled 37 of these in total, including 2 Cubs (Kris Bryant & Kyle Hendricks) and a pink-back parallel of Eddie Murray. 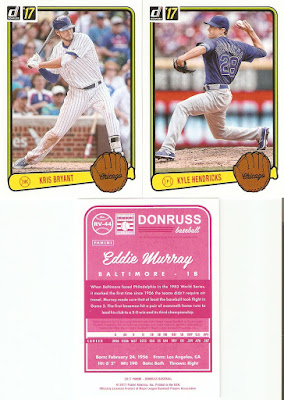 There were also a few serial-numbered foil cards, including this American Pride card. These feature players from the Collegiate National team and I pulled a T.J Friedl numbered 190/349. 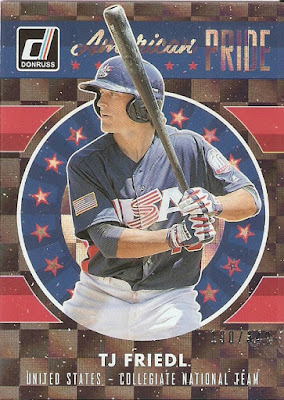 There's also this Jose Altuve All Stars card, numbered 955/999. There isn't much of anything on the card to let you know it has anything to do with All-Stars, but apparently that's what it is. 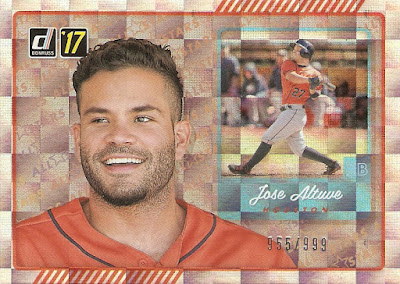 There was also this Dominator card of Rick Porcello, numbered 30/249. 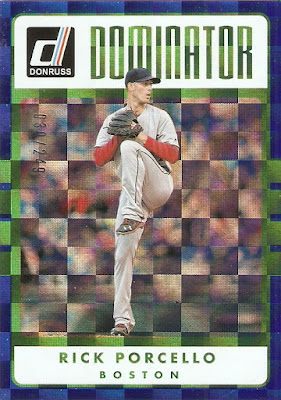 The last of the inserts was this Elite Series card of Kris Bryant, numbered 67/349. I really like how much Donruss has brought back from its history, and Elite was a big part of it. It was the first big insert set (I think) and cards from the early '90s still hold their value, so it's nice to see them keep these around. 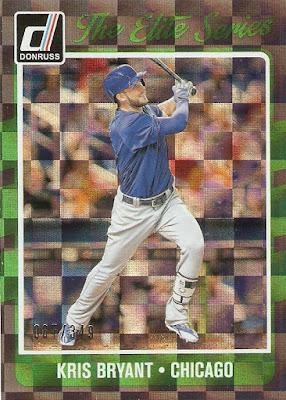 Now, each box is guaranteed three autograph or memorabilia cards, but I was pretty lucky in that I got four. The first is a Diamond Collection bat card of Mike Napoli. Even though the Cleveland Indians came so close to breaking my heart last October, I really like Napoli as a player, dating back to his first of three (so far) stints with the Texas Rangers, and love that the memorabilia piece for this slugger is a bat. 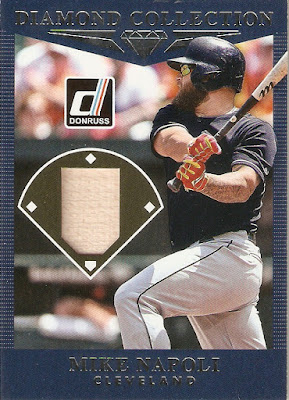 There was also this card from the same memorabilia set of Jacoby Ellsbury. It features a fantastic jersey swatch with a Yankees pinstripe. It's always interesting when a player switches teams to a rival. Ellsbury goes from the Red Sox to the Yankees as a free agent a couple of years ago, and I'm sure the Red Sox faithful were not very happy at all to see him in pinstripes. 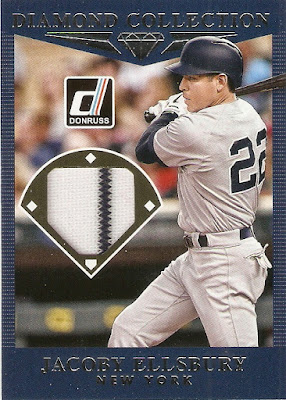 There were two relics and two autographs, including this autographed card of St. Louis cardinals pitcher Luke Weaver from the Signature Series insert set. It is a red parallel, and is numbered 92/99. As far as I know, he isn't related to the other pitching Weavers, Jeff & Jered. 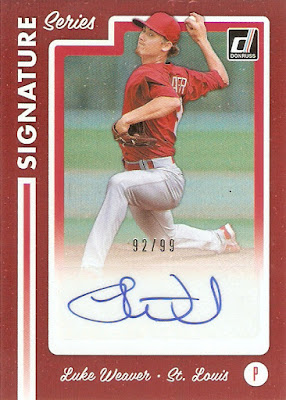 Lastly, the big hit of the box for me was this Signature Series Gold card of Alex Bregman, numbered 30/49. Bregman was the 2nd overall pick of the 2015 amateur draft, and has already made it up to the Major League roster. The big draw for Bregman was his discipline at the plate, which has led him to being named USA Today's 2016 Minor League Player of the Year. 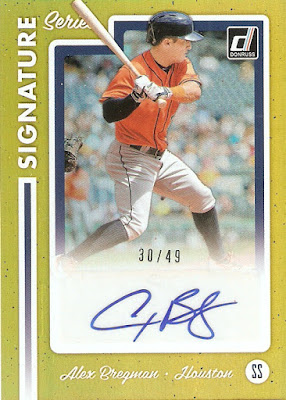 That's it for this box. Despite the lack of MLB licensing, which has taken away all logos and team names with these cards, I really like what Panini did with this Donruss set. Of course, I got a great hit with the Bregman card, but even still, it's an affordable box of cards, with the potential for some great cards to be pulled. It's definitely a risk worth taking.
Posted by Matt Pederson at 12:43 PM