I had originally purchased this redemption for a Dontari Poe autographed card from 2012 Panini Prime Signatures at my LCS in hopes that Poe would be too busy doing whatever to return his signed stickers, and I'd be in for another great round of Redemption Replacement Roulette. However, now that I have the card in hand, I'm pretty ok with this one. 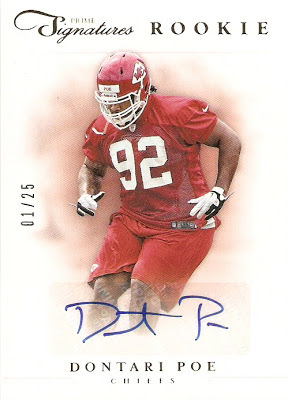 Poe was the Chief's first round pick of the 2013 NFL Draft, and made an impact on the team quickly. After starting nose tackle Anthony Toribio went out with an injury during the preseason, Poe earned the starting job and held on to it, starting all 16 regular season games. He recorded 38 tackles (28 unassisted) and was named the Chiefs' Rookie of the Year by the Kansas City Star.
Posted by Matt Pederson at 8:33 AM